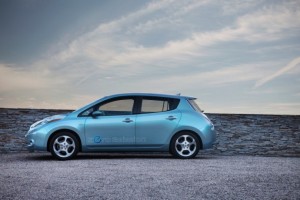 EPA scorecards for the most fuel efficient vehicles are heating up.  The EPA just released the Nissan Leaf’s score of 99 miles per gallon equivalent for the all-electric compact.

According to the Environment Protection Agency, the Leaf can reach a top mpge, or miles per gallon equivalent, of 106 in the city and 92 mpge on the highway.  The total range will be an official 73 miles on a full charge, some 27 miles less than Nissan’s 100 miles estimate.

Unlike other cars, the fuel efficiency for electric vehicles is higher in the city than on the highway, where electric engines work comparatively harder to deliver enough power to reach highway speeds than do all-gas vehicles.  Hybrids, too, encounter this effect, with the majority of electric power used at low speeds consistent with city driving, and with gasoline becoming the main fuel source on the highway.

EPA ratings have been the subject of some controversy as car manufacturers attempt to make the most fuel efficient automobiles.  The EPA currently considers a gallon of gasoline to equal 33.7 kilowatt-hours.  At the average rate of 8.9 cents per kilowatt-hour, the equivalency is correct only if current gas prices are exactly $2.99.  Higher gas prices mean that, in terms of dollars, the Leaf may be even more efficient than the Prius, lower gas prices relative to electricity prices mean the Prius may be more cost-effective than the Leaf.  Consumers who accept EPA mpge ratings as a means to demonstrate cost-effectiveness of the vehicle may be misinformed about the true difference in cost between a gasoline powered vehicle and a fully electric car.

Another important consideration for consumers is the time it takes to power the car.  The Level 2 charger—there are three levels of charging devices—will fully power the Leaf in less than seven hours through a 240 volt plug.

Electric Cars to Get Second Spotlight on the Silver Screen