Maui residents and county workers continue to deal with lingering problems from last night’s heavy rains.  The wet weather is a taste of what could be in store for the islands, as the National Weather Service continues to forecast potential heavy rains and thunderstorms from Wednesday morning through Thursday afternoon.

Maui Mayor Alan Arakawa joined Civil Defense officials last night in monitoring and oversight of the county’s response to weather related incidents.  Today he expressed gratitude for those who worked to safeguard lives and property. 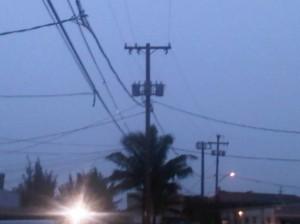 Crews are still dealing with the after-effects of last night's wet weather, but continue to make preparations as more rain is forecast tomorrow and Thursday. Photo by Wendy Osher.

“We responded quickly to emergencies and tried to be as prepared as we could ahead of time,” Arakawa said. “But I ask that residents please be cautious out there, as the heavier rainfall has yet to hit.”

The most urgent problem is the potentialhealth threat posed by a broken waterline in Upper Kula near Kawehi Place. Water Supply officials advise that until the water can be tested residents of Alae, Naalae Road, Waipoli, Polipoli, Waiohuli, Keokea, Ulapalakua and Kanaio should all boil their water as a precautionary measure against possible contamination.

County crews are continuing to clear a culvert near Poli Poli Road that had overflowed onto a nearby road. The cause, workers say, was blockage from debris.

An estimated 6-8 inches of mud accumulated on the road near the Island Sands condominium in Maalaea last night. Most of the mud has been moved, but the county planned to dispatch a water truck to the area today to spray down remnant mud.

Dispatchers with the Maui Police Department received numerous calls last night, most of them involving flooding and downed trees. A downed tree in a gulch near the Longs Drug Store in Pukalani caused one of two weather-related power outages last night.  The other was caused by a lightning strike.  A single downed tree report was received this morning of an incident near the top of Olinda Road.

The Maui Planning Commission will delay more than a dozen site inspections that were planned in West Maui on Wednesday, due to the threat of heavy rains. County Deputy Director of Communications, Ryan Piros said the commission had lined up 14 different site inspections in what was to be their most aggressive one-day agenda ever, but will instead hold the inspections on February 3, 2011. 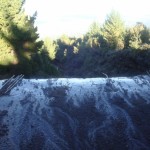 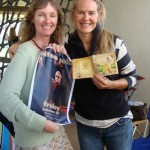