A 35-foot-high Wheel of Death takes center stage at the Maui Moon Theater, as the latest attraction in the Cirque Polynesia lineup. 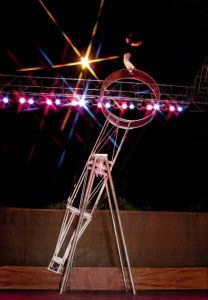 “The name says it all,” said Cornell “Tuffy” Nicholas, Producer of Cirque Polynesia.

The spinning mechanical wheel resembles a giant pendulum and with no safety nets or harnesses.

Performing artist Stefan Terni uses his leg work to power the giant steel apparatus, running in and out of the structure, and jumping rope blindfolded to add to the drama.

The new attraction for Cirque Polynesia, is a classic circus act from the 1950s.

Other acts featured in the lineup include high-wire, contortion, aerial illusionists, acrobats, daredevil balancing, and quick-change.

Terni relocated to Hawaii from Chisinau, Moldova, to perform in the Maui show. He began his career as a gymnast at the age of seven, and began touring the world in various circus shows beginning at age 16.  Terni also performs with his wife Alena Chernova, in the Lyra act, that features a large suspended hoop that twists and turns while gliding through the air.

Cirque Polynesia opened on Maui in June 2009 at the Hyatt Regency Maui Resort & Spa.  Since it’s opening a year-and-a-half ago, the show was voted as a “Best New Business” finalist by Hawaii Business Magazine readers.

The 75-minute show tells the tale of two worlds coming together on a tropical stormy night.

The show plays nightly (except Sundays) at 7:30 p.m.  Pre- and post-Dinner & Show packages are available at either ‘Ūmalu or Son’z Maui at Swan Court restaurants, both located at the Hyatt Regency Maui Resort & Spa.

For additional information, visit www.CirquePolynesia.com or call the box office at (808) 667-4540. 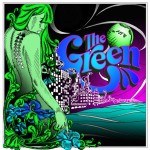 Ride the Reggae with SOJA