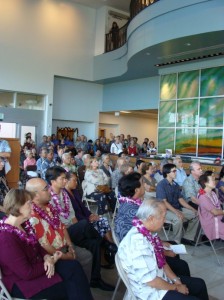 Family, friends and colleagues of the late Rep. Nakasone gathered in the lobby of MMMC Kahului Tower to witness the renaming and re-dedication of the building. File photo by Wendy Osher.

Governor Neil Abercrombie released $15 million to the Maui Memorial Medical Center (MMMC) for expansion efforts and infrastructure upgrades.  The funding was appropriated by the Hawaii State Legislature during the 2009 session.  The money will be used for Phase II Master Plan construction and design at the facility.

Phase II of the MMMC Master Plan comes on the heels of major capital improvements in recent years, including the construction of the 75,000 sq ft Representative Bob Nakasone Kahului Tower, which was completed in 2006 and the Emergency Department expansion and upgrade completed in 2008.

MMMC Chief Executive Officer Wesley Lo credited Senate President Shan Tsutsui of Maui with playing an instrumental role in obtaining General Obligation bond funding for the hospital.  “Senator Tsutsui’s continued support of improving the healthcare services to the Maui County community is greatly appreciated,” said Lo.  “He recognized the importance and urgency of our being able to take the improvements to the next level, by preparing for Phase II of the hospital expansion,” he said.

The hospital recently started a full cardiovascular service line with the hiring of several new hospital-based interventional cardiologists who join cardiothoracic surgeon, Dr. Richard “Pat” Cochran. Part of the plan for Phase II is to build a new heart center within a new tower on the hospital campus. 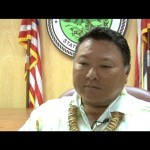 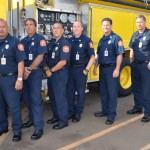