Advertising for the 13th annual Keiki Hula Festival took on a new twist this year with the unleashing of a small flash mob at Ka’anapali Beach.

Two dozen youth dancers from Te Tiare Patitifa, a Polynesian dance troupe from Wailuku, participated in the miniature mob–appearing at first to be beach-goers, then breaking into Tahitian dance on command.

The performance took place on Friday, a day ahead of the weekend Keiki Hula Festival, held at the Lahaina Cannery Mall. 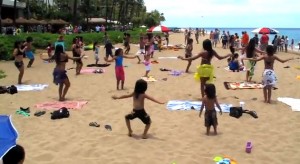 “It’s a bit unconventional, but we’re proud to showcase the talent of our performers — especially the kids — and promote the culture of our islands,” said Lynn Okamoto, general manager of Lahaina Cannery Mall. “There have been other flash mobs in Hawaii, but they’re dancing to Katy Perry and Usher. We wanted to represent the host culture. We wanted to share a little aloha,” said Okamoto.

The performance was choreographed by kumu Keoni Manuel, and was coordinated by Gilbert & Associates, the advertising agency for the Lahaina Cannery Mall.

The annual, two-day Keiki Hula Festival featured seven halau from across Maui County, showcasing their talents in kahiko (ancient) and auana (modern) hula.  The festival is held each year as a showcase to share the traditions of the islands and the aloha spirit. 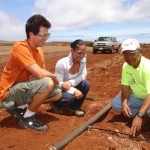