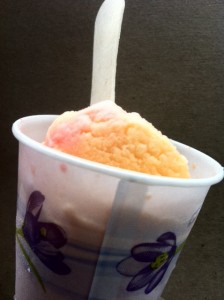 It’s the end of the week. You and the family deserve a treat. For a little over a buck each, you can buy yourself and the kids a cold creamy concoction in strawberry and/or pineapple flavor. Be ready to soak up the smiles and sugar-addled adoration. Guri Guri from Tasaka’s in Maui Mall, should be on everyone’s to eat list.

There are a couple of things on Maui that locals and tourists immediately identify: pineapples and sugarcane. Scratch just a bit beneath that agricultural veneer, and you have the plantation days’ mom and pop establishments with simple recipes and ono grinds.

Some little shops have trudged through the decades and remained in operation, while others have faded away. Tasaka’s Guri Guri is one place, which maintains the sweet and simple integrity of the old days. Family owned and operated, the legacy of this shop can be traced through the stories and memories of everyday Maui people, to former President Bill Clinton, who stopped by to satisfy a sweet tooth.

What is guri guri? Well, it’s not really a sherbert, nor is it an ice cream. It’s a hybrid that refuses to be boxed into either category. It’s definitely sweet, and has a rougher textural quality than ice cream, especially if you buy a pint to take-home. It is nowhere near as rich as gelato, but has a pleasing mouth-feel that’s icy and creamy without being cloyingly creamy-sweet.

The strawberry guri guri color is similar to the pink red blush of strawberry soda. It’s bright in color, and won’t taste like a Kula strawberry. It’s kind of like ordering a strawberry icee. You don’t really expect it to taste like a real strawberry do you? Whatever the expectations, the fact is that this guri guri shop continues to be a habit with  visitors and locals spanning generations. 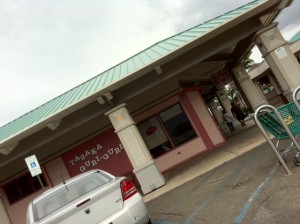 This shop is located at the Maui Mall in Kahului. For more details call Tasaka’s at, 871-4513. 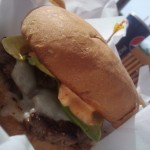 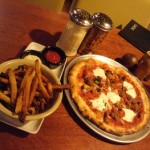