A large northwest swell is moving down the island chain, bringing warning level surf to the north and west facing shores of most of the islands.

The warning remains in effect for Maui and Molokai through 6 a.m. on Thursday, with surf on the north facing shores expected to be in the 25 to 35 foot range, and 15 to 25 feet on the West side.

Wave run-up has already been reported in low-lying areas on Oahu at Haleiwa and Mokuleia this morning.

The warning conditions will result in battering waves along the shoreline, dangerous swimming conditions, and deadly rip currents.

A large swell is due to arrive in the islands this morning, bringing warning level surf to the north and west shores.

Forecasters from the NWS called the swell “ginormous” saying it will peak on Wednesday morning and remain elevated overnight before subsiding on Thursday.

The three-month holding period for the Quiksilver In Memory of Eddie Aikau started on December 1st, and runs through to February 29, 2012.

In order to generate the perfect wave at Waimea Bay, a combination of conditions must materialize.

According to the contest website, the ideal Eddie swell typically travels 1500 nautical miles out of the NW, peaks at Waimea during the daylight hours, and pushes in from a narrow window of between 315 and 325 degrees. 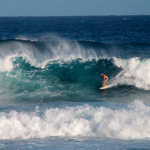 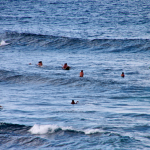