A Korean shipping company and its chief engineer were convicted in Hawaii for environmental crimes for allegedly dumping oily waste, obstructing justice and covering up pollution.

A $1,150,000 criminal penalty was assessed against the company, $250,000 of which will go to the National Fish and Wildlife Foundation to be used for projects aimed at protecting and restoring marine resources in Hawaii.  Capt. Joanna Nunan, Commander Coast Guard Sector Honolulu said a substantial portion of the $1.15 million settlement will go to preserve Hawaii’s coral reefs.

According to the US Department of Justice, Keoje Marine Co. Ltd. pleaded guilty to three felonies including: violating the Clean Water Act for the dumping of oily bilge waste into waters off of Hawaii; violating the Act to Prevent Pollution from ships for covering up the dumping of the oily waste by falsifying the vessel’s oil record book; and for obstruction of justice during a US Coast Guard inspection of the M/T Keoje Tiger in October 2011.

“The shipping industry is crucial to global commerce, but it is also subject to US and international laws that protect the ocean from all-too-common and illegal practices exhibited by the defendant,” said Moreno.

Moreno said the substantial penalty should demonstrate to the shipping industry that those who illegally dump in US waters, or who “compound their crime by lying to the US Coast Guard, will be investigated, prosecuted, and held fully accountable.”

US Attorney Florence Nakakuni said enforcement of the environmental laws in Hawaii is a high priority.  “This case will help us improve our environment by mandating that $250,000 of the corporation’s fine be used to improve Hawaii’s coral reefs,” said Nakakuni.  “Overall, this case is an important victory for those of us who cherish Hawaii,” she said.

Keoje Marine Co. Ltd. owned and operated the M/T Keoje Tiger, a 4,228 gross ton oil tanker that brought fuel and supplies to fishing vessels in the South Pacific as a “floating gas station.”

The chief engineer of the vessel, Bong Seob Bag, 54, pleaded guilty to falsifying the vessel’s oil record book and failing to record that oily bilge waste had been directly discharged into the sea.  First Assistant Engineer Dwintoro, 46, also pleaded guilty for his role in connection to the falsified records.

According to the plea agreement, during a voyage to Hawaii that ended in Honolulu on October 12, 2011, certain crewmembers from the vessel knowingly discharged oil in the form of oily bilge waste into the Exclusive Economic Zone of the United States in quantities that may have been harmful to the natural resources of the United States.

The practice onboard the vessel was uncovered by US Coast Guard inspectors after receiving a tip from a crewmember. 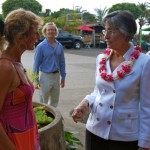 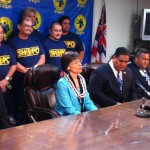