A Flash Flood Warning has been extended until 3:30 p.m. for the island of Kauai.

At 1:18 p.m., forecasters from the National Weather Service say radar showed heavy showers continuing over portions of the Garden Isle.

Civil Defense authorities report that the Bridge at Hanalei River remains closed due to flooding.

A Flash Flood Warning remains in effect for Kauai until 1:30 this afternoon.

At 12:05 p.m., Civil Defense authorities reported that flooding conditions resulted in the closure of the road at the Hanalei Bridge.

Forecasters from the National Weather Service said areas of heavy rainfall continue over Kauai from the southwest.

A flood warning replaces a flood advisory for the island of Kauai as a band of heavy rain advances across the island.

The river gauge at Hanalei was expected to increase above 7.5 feet, warranting flood warnings for a rapid rise in water levels.

The rain was moving over the Garden Isle from the southwest at last report.

The warning remains in effect until 1:30 p.m.

An area of heavy rain has put a damper on today’s forecast for Kauai.

The National Weather Service issued a Flood Advisory for the Garden Isle at around 9:20 this morning.

According to NWS forecasters, radar showed heavy rain 7 miles southeast of Kokee State Park, or about 15 miles northwest of Lihue.

Another band of showers, located just west of the island, was expected to progress eastward across Kauai through late morning.

The flood advisory remains in effect for Kauai until 12:15 p.m., but could be extended if heavy rain persists.

Here on Maui, the forecast calls for only a 20% chance of isolated showers, with mostly sunny skies and widespread haze.  Highs will be near 84 degrees with winds blowing from the south at 16 to 18 miles per hour with higher gusts. 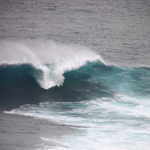