A day after a double motorcycle fatality on Maui, a separate, near-fatal motorcycle accident occurred last night in Kahului.

The accident was reported at 9:37 p.m. on Monday, March 19, 2012, at the Kane/Vevau Street intersection near the East entrance of the Queen Ka’ahumanu Shopping Center.

A 44-year-old man from Makawao was transported to hospital with critical life-threatening injuries after the motorcycle he was operating collided into the rear bed of a pickup truck.

Police say the motorcyclist was operating a 2007 KTM/EXC motorcycle and was headed south on Kane Street at a high rate of speed, when he collided with a 2002 Ford F-150 pick-up truck headed in the opposite direction. The F-150 was executing a left hand turn towards the Queen Ka’ahumanu Shopping Center.

The motorcyclist was not wearing a helmet and medics say he suffered multiple traumatic injuries to his arms, legs and pelvis.

He was transported by medics to the Maui Memorial Medical Center Emergency Room for further treatment.

The operator of the pickup, a 20-year-old man, and his 19-year-old male passenger were not injured.

At this time, police say speed is suspected as a factor in the crash. The involvement of alcohol and drugs remains under investigation. 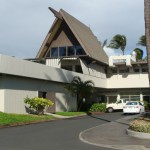