A brush fire in West Maui burned a total of four acres before it was contained at 7:44 p.m. on Saturday, June 9, 2012, fire officials said.

The fire was first reported at 3:04 p.m. in an area of brush off of Kenui Street near next to the Lahaina Cannery Mall.

At 9:30 p.m., fire crews remained on scene, where they were conducting mop-up operations.

Maui Fire Services Chief Lee Mainaga said the cause of the fire is undetermined, no damages were reported, and there were no reported injuries.

Maui firefighters are on the scene of a brush fire that had burned an estimated four acres at last report, fire officials said.

We began receiving inquiries at around 3:38 p.m., with heavy black smoke reported by passing motorists.

The fire is located near the Lahaina Cannery Mall off of Kenui Street in West Maui.

Maui Fire Services Chief Lee Mainaga said crews are on scene and were working to contain the fire by setting perimeters on all four sides. 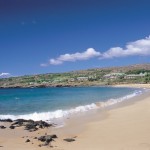