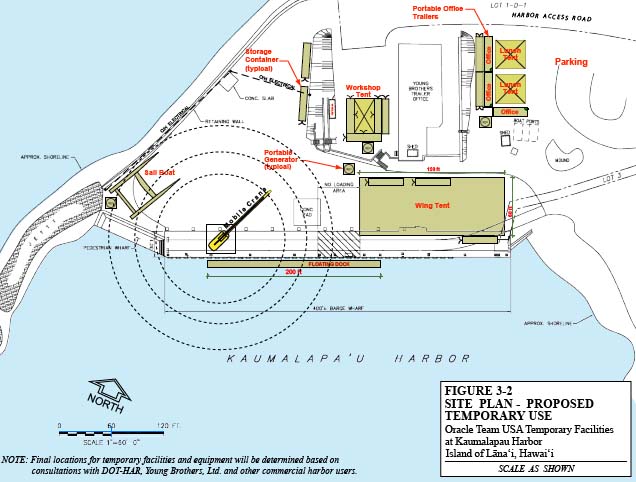 ORACLE Racing is proposing the use of Kaumalapau Harbor on the island of Lāna‘i as a temporary base of operations for sea trials, training, and related research to support  the development of a high-performance boat for competitive sailing events.

The Oracle Team USA is a professional sailing team comprised of designers, boat builders, sailors and shore crew based in San Francisco, California.

According to the Draft Environmental Assessment, sea and weather conditions at OTUSA’s home port in San Francisco are not optimal during the winter season.

The temporary use of the Kaumalapau Harbor during the 2012‐2013 winter months is sought as the preferred alternative to address the project’s requirements.

Under the Draft EA, portions of the harbor wharf would be used to stage temporary facilities comprised of 11 standard 40‐foot shipping containers containing tools, material and equipment; three office trailers; and two tents. In addition, two or three temporary moorings would be placed within the harbor.

The project calls for a temporary, 200‐foot long floating dock comprised of five connected segments, each 7 feet wide by 40 feet long, that would be moored to the existing dock to facilitate crew access to the support boats and sail boat.

The boat itself is a catamaran‐class sail boat comprised of a twin‐hull sail platform and a rigid wingsail. The platform has a hull length of 72 feet and beam of 46 feet. The wingsail is 131 feet in height. The sail boat will be barged to the harbor and assembled on site.

According to the DEA, all planned uses would be temporary for a limited duration of approximately four months including set up and pack up.

Sea trials and research activities would last approximately six weeks. Upon the completion of training, research and data collection activities, all materials used for the project would then be removed from the site and the area would be restored to pre‐existing conditions.

The island’s barge service through Young Brothers runs weekly, arriving at first light on Wednesdays, and departing around 4 p.m. OTUSA plans to use barge days as a day off during which no sailing or maintenance activities will occur at the harbor.

The 30-day public review and comment period on the Draft Environmental Assessment for the project is due by October 23, 2012. 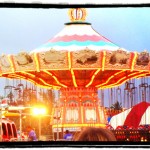 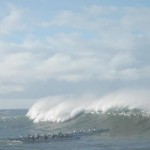