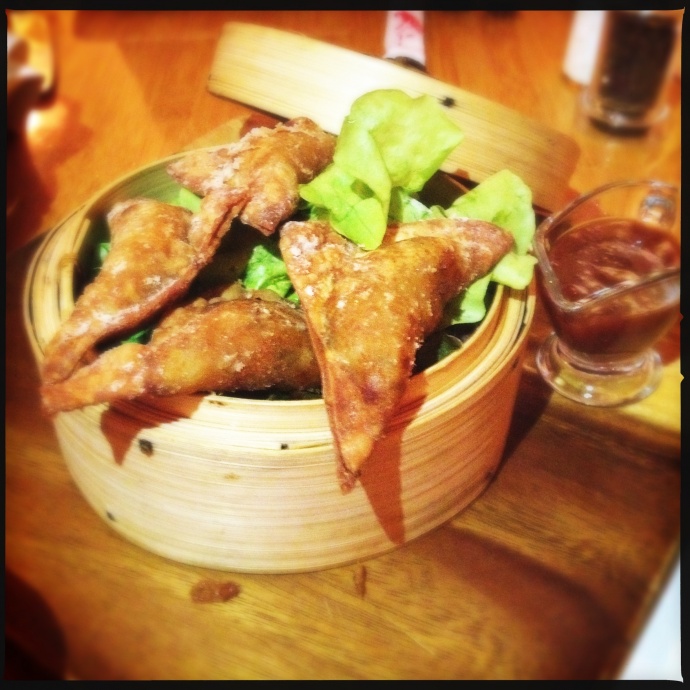 Bev Gannon’s Hali’imaile General Store is something of a legend on this island.

First off, there is pretty much nothing to see or do whatsoever in Hali’imaile, so the mere fact that visitors and locals have trekked up there for decades surely counts for something.

So who are we to criticize?

Well, that’s a fair question, but here it comes anyway.

We started with the Kalua Pork and Goat Cheese Wontons ($12). The menu mentions they are “in a bamboo basket, with mango BBQ dipping sauce.”

Um. Why bring up the basket if it isn’t edible? That’s like saying, “served on a plate.” Perhaps mention the gargantuan bed of undressed butter lettuce if you feel the menu needs more words, but we digress…

The wontons are like a reinterpreted crab rangoon, packed with the powerful punch of barbecue sauce. We couldn’t discern any goat cheese flavor, and arguably the additional gravy boat of barbecue sauce on the side was overkill.

Still, they were crispy, so at least there’s that. 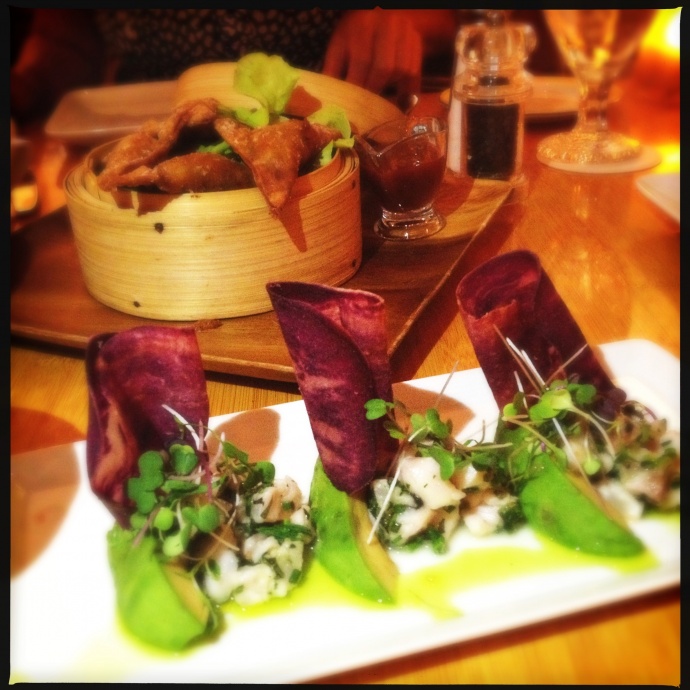 Next up was Bev’s “Famous” Crab Pizza  ($12) served “on a handmade six-inch pizza crust with the ‘I’ll never tell’ crab topping.” That’s a lot of talk for a six-inch pizza.

The topping is pretty greasy – the same recipe served at Joe’s (Note: also owned by Bev Gannon), one imagines – but it pairs better with the Boboli-esque pizza crust than it did with the tortilla chips at the Wailea establishment.

A debate broke out at the table as to whether or not it contained real crab or “krabb,” but without sufficient DNA analysis, we are not in a position to declare one way or another.

The Fresh Catch Ceviche  ($18) mostly lived up to our expectations. The three fried sweet potato pieces were a bit kitschy and not quite ample to scoop up all the available fish, but we appreciate the spirit of the plating.

The ceviche itself was made with ono that night, and was mixed with lime, sea salt and mint. Mint would not be everyone’s first choice (*ahem*), but arguably that’s just a personal taste “tomato, tomahto” thing. The fish, however, was excellent and it was mostly a traditional and enjoyable few bites. 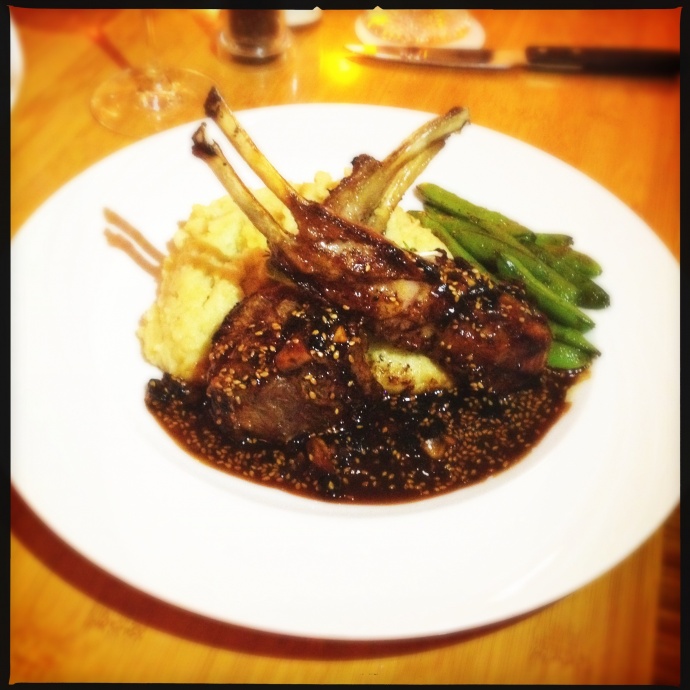 The issue here? Two of the three slices of avocado served with the ceviche were visibly rancid with dark brown areas. When this was pointed out to the waitress, she studied it, glared at us, and left with the third-full plate of food…never to speak of it again.

The ceviche did, however, appear on the bill.

During the course of our visits, we sampled the Grilled Rack of Lamb ($38).  Two double-cut chops are served with black bean Hunan sauce on wasabi mashed potatoes.

And when Bev says wasabi, stand back: she means WASABI.

Lordy day! There’s enough wasabi in there to clear your sinuses for a week.

The lamb, in contrast, was like buttah. You don’t even have to chew it; it’s that tender and perfectly cooked. The meat was served with some very nice, fresh sugar snap peas: an excellent accompaniment.

The Tamarind Glazed Duck Breast ($30) was quite good, although the flavor of curry drowned out the subtle duck meat flavor.

Served exactly as ordered – rare plus – the meat was tender and expertly cooked. However, it rested atop a confusing mash up of Hamakua mushrooms, roasted Molokai sweet potatoes, corn, edamame, and that pesky curry sauce. 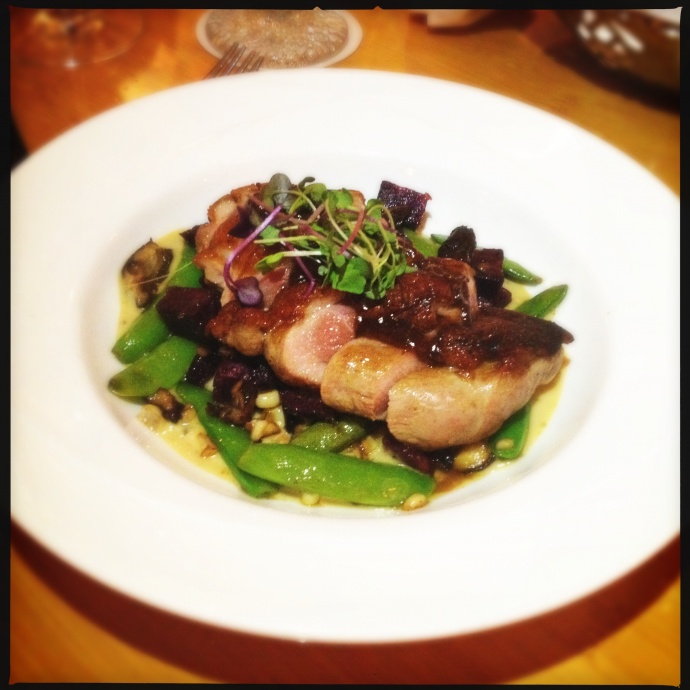 Leave some of that on the side (maybe bust out another gravy boat?), pare down the accompaniments, and it’s got the potential for a stunning dish.

One of the most well-known and enduring items on the Hali’imaile General Store menu is the Macadamia Nut Crusted Fresh Catch  ($38). Our version was made with mahi mahi.

The delicate fish was flaky and perfectly cooked and coated with a very light – read: cannot taste the macadamia nuts – breading.

The filet is plated upon chunky mashed purple Molokai sweet potatoes, and the mango salsa on top and surrounding lilikoi butter sauce add a delightfully tangy and much-needed acidic pop to the otherwise subtle flavors.

Why you gotta do these chickens so wrong?

First there was the steak knife served with the Chicken and Waffles at Joe’s (true story).

And now – for a dish with such clearly beautiful intentions and possibilities – things went so terribly awry. 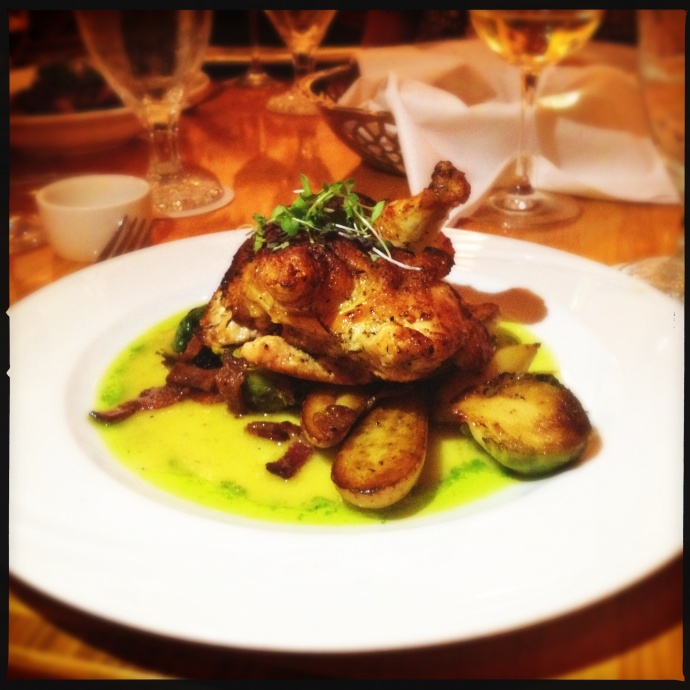 To be fair, we had 7:30 p.m. reservations and service was leisurely. It was easily 8:30 p.m. by the time our main dishes rolled out, and the bird was probably excellent three hours earlier.

It had the overcooked appearance and taste of a Safeway rotisserie chicken that has been sitting under heat lamps since 7 a.m.

Dry is an understatement.

“It’s like eating a sock stuffed with sand and cotton balls,” someone commented…and yet we kept eating.

That’s because of the accompaniments. The crisp maple bacon was, well, bacon, which right there means it was awesome. The Meyer lemon sauce was deliciously tart and rich.

Still, one of the most certain elements of the best comfort food is the time and affection that goes into preparing it. Perhaps the restaurant had too many other guests or perhaps it was just too late in the evening, but during our visits, you couldn’t quite taste the love. 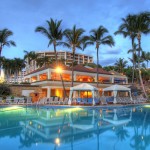 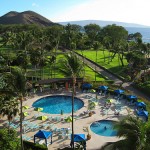