Maui police responded to 5 burglaries over a seven day period, between February 24 and March 2, 2013.

There were incidents reported at the following locations: Haiku, Kihei, Napili, Waiehu and Wailea. 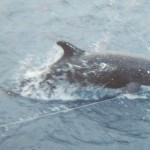