VIDEO: Is This Behavior by Kite Surfers Dangerous?

Watch these videos and leave a comment below on whether you think this could be dangerous for bystanders.

These videos come on the heels of a previous issue of kite surfers kiting through the “fishpond” area of Ka’a Point at high speeds while swimmers were within. The Department of Land and Natural Resources determined the practice to be illegal, based on ordinances already in place.

However, these videos attempt to show what can happen later, back on the beach at the same location. These videos were provided by Philip Botek, who claims his 4-year-old son has since been injured by kite surfers, and has sustained harassment, such as verbal abuse and having his vehicle’s tires slashed.

For more on this issue, see Related Stories below. 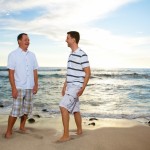