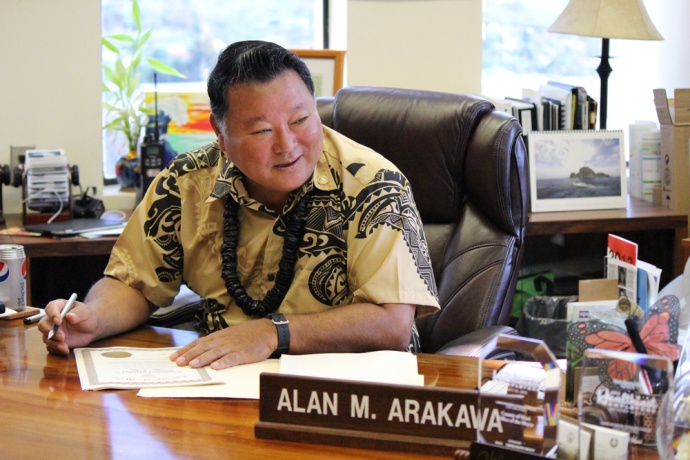 Maui Mayor Alan Arakawa will discuss legislative priorities during his travels to Honolulu this afternoon, where he will attend the Hawaiʻi Council of Mayors meeting.

“What we’ve agreed to is to meet on the important topics, and as mayors, to have agreements on what we’re going to go to the legislature with,” said Mayor Arakawa in an exclusive interview this morning.

“If we all agree on a topic, then we will create a unified voice going to the legislature–(with) all four counties being represented, (and) backing the legislation,” he said.  “If not, we’ll go as individuals to speak before the legislature on county-specific packages.”

The mayor has also been meeting with the Hawaiʻi State Association of Counties, which includes representation from council members from each county, and their council chairs.

“What we’re trying to do is get together a coalition whereby all the council members, all of the council chairs, and the four mayors –if we can agree to specific legislation, then we’ll take that to the legislature with the unified package,” said Arakawa.

“In all probability (we’re) going to defend beach liability as a group,” said Arakawa, noting that legislation for the counties expires this coming year, at which point, “major challenges” could surface if the counties are not afforded the same protection as the state.

“Another area that we’ve all been working on is the unfunded mandates for the employee benefit package,” said the mayor. “This is something that we’re not sure where it’s going to end up; how much it’s going to end up costing all of us; and how we’re going to deal with it.”

The mayor said another area of focus will be cost reduction and discussion of possible benefits of combining different county and state services in areas like parks and the state Department of Land and Natural Resources.

“The county and the state permit process becomes very, very expensive and time consuming for everyone involved. So if we can combine some of these jurisdictions, we would eliminate a lot of the cost to the public, and to the counties, and to the state,” said Arakawa.

The goal he said is, “Trying to make some logical decisions to make government run smoother.”

The counties have also been fighting to maintain their share of the Transient Accommodations Tax over the past few years, in recurrent discussion during past legislative sessions.

He continued saying, “The state has said for a number of years now, that there’s a possibility of taking the entire TAT away from the counties. If this becomes a reality,” he said, then the counties need to have some kind of a resource to be able to count on as far as income and options.

According to the mayor, the County of Maui generally brings in $20 million in TAT revenues each year. 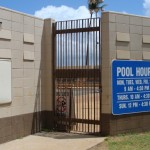 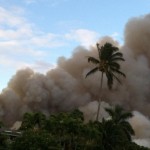