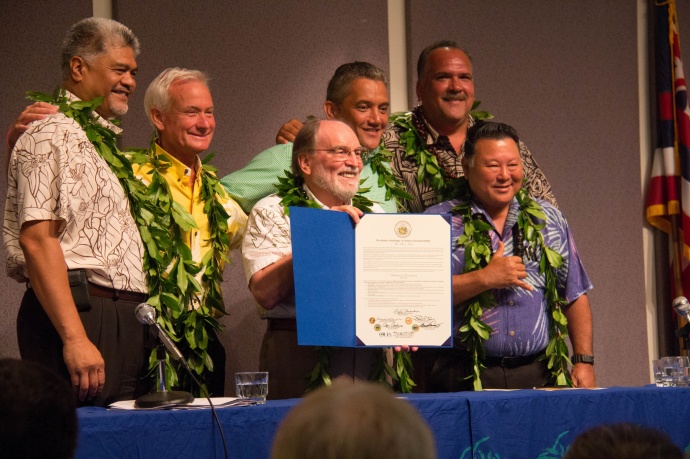 Top executives of the state and each of its counties this week formalized a joint commitment to increase Hawaii’s sustainability.

The declaration of “Aloha+ Challenge: A Culture of Sustainability – He Nohona `Ae`oia” sets target goals in six areas to be achieved by 2030.

Taking part in Monday’s signing ceremony were Gov. Neil Abercrombie, mayors of the four counties and leadership of the Office of Hawaiian Affairs.

According to the governor’s office, the goals of the Aloha+ Challenge are:

The Aloha+ Challenge, which was established through a resolution passed unanimously this year by the Legislature, is already attracting international attention, the governor’s office said.

Along with the US Department of State, Hawaii has been invited to announce the Aloha+ Challenge on the world stage at a high-level Global Island Partnership event in Samoa being held this September during the United Nations’ International Conference on Small Island Developing States, which focuses on sustainable development.

“The Aloha+ Challenge brings us all together across jurisdictions, agencies, sectors and communities to build a sustainable Hawaii for current and future generations,” Abercrombie said in a statement.

“The targets transcend political timelines with a longer-term vision that also calls upon us to take bold action now,” he said. “As a microcosm of the world’s sustainability challenges, it is time for Hawaii to become a global model of how to develop innovative and collaborative solutions.” 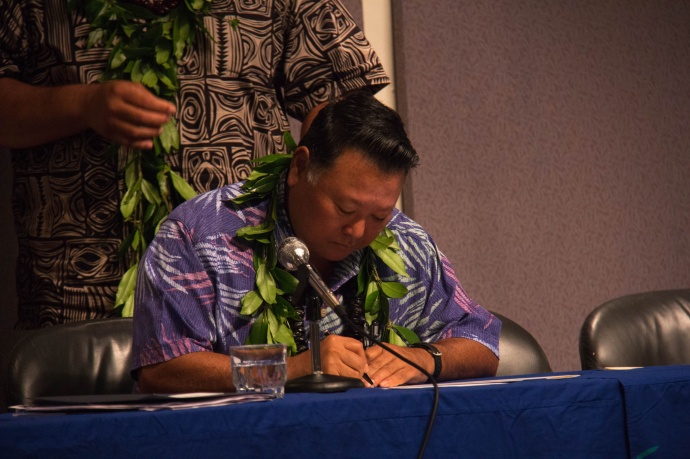 “It reinforces that our decision-making as a state must focus on sustaining our resources for generations to come, and must be rooted in aloha,” Kenoi said.

Maui Mayor Alan Arakawa said the challenge is about “leading by example.”

“Our goal is to provide a higher quality of life for our children, and to build a community for our grandchildren that they can be proud of,” Arakawa said. 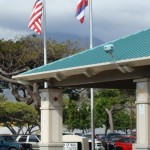 DMVL Offices to Close for Staff Training on Friday, July 11 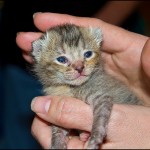 Third Feline Virus Case on Maui Suggests it is Spreading