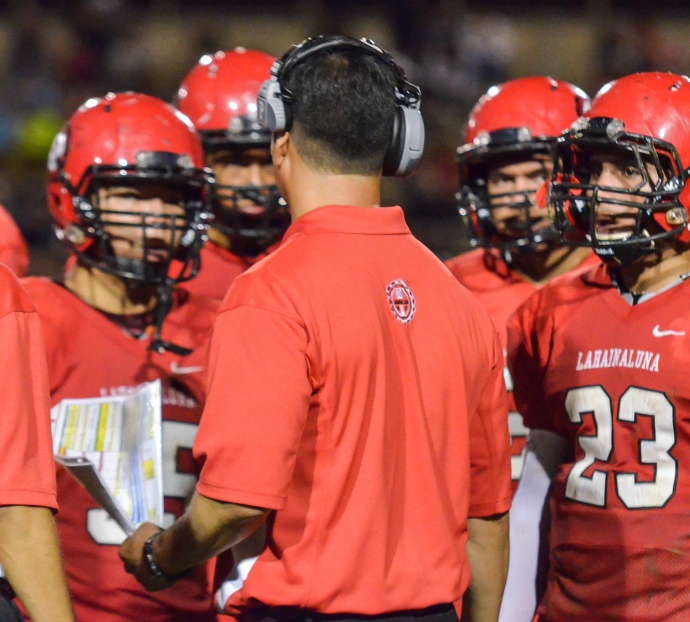 This time, Lahainaluna is bigger, stronger and more experienced.

This time, the Lunas are unbeaten and ranked No. 1.

This time, top-seeded Lahainaluna comes to Aloha Stadium confident and accomplished, fresh off its record-breaking 52-7 rout of Kamehameha Hawaii.

This time, the Lahainaluna High School football team must beat No. 2 ʻIolani in the First Hawaiian Bank Division II State Football Championships. Any other outcome will be heartbreaking.

“Unfortunately it’s true,” co-head coach Bobby Watson said Wednesday. “Losing to Kaiser last year was a big disappointment. Like Coach Garret (Tihada) said the goal was to get back to the finals and we’re there, so now we have to finish it off.”

The Lunas’ trek to Friday’s matinee Division II state championship starts tonight at 6:30 p.m. when the team bus departs the Lahainaluna campus. Fans of the Luna football team are planning a championship sendoff by lining Lahainaluna Road with signs and noise-makers. 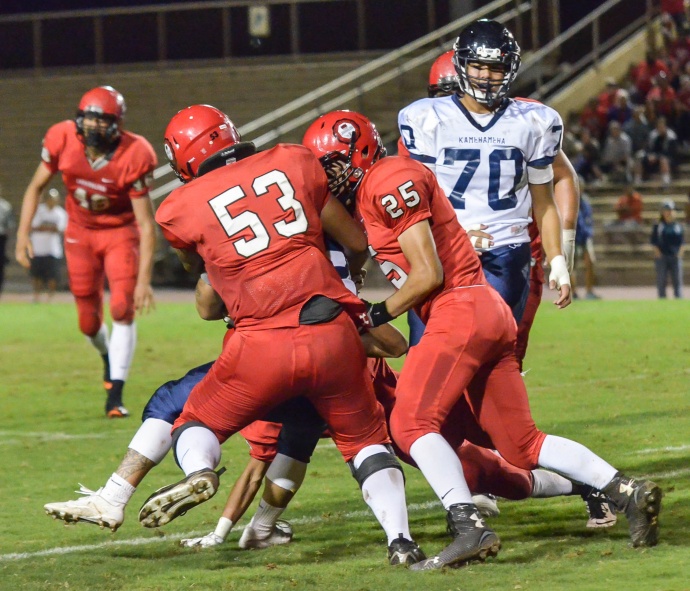 Lahainaluna’s defense will have to have a big game Friday if the Lunas are going to beat Iolani. Here the defense is being led by Brandon Kaina (53) and Scott Isaac Medeiros-Tangatailoa (25) against Kamehameha Hawaii last week. Photo by Rodney S. Yap.

“(Coach) Kenui (Watson) talked to the team in the morning (Tuesday) and then (co-captain) Connor (Mowat) talked to them after practice and told them that they (the seniors) know what it’s like to keep losing and that they have worked too hard to let that happen again.”

Tonight’s tribute is expected to be bigger than in 2012, when a Lahaina Fire Department tanker escorted the bus.

“This town has always been great support for us and it’s good for the kids to see,” Watson said.

Friday’s Hawaiʻi High School Athletic Association’s state football doubleheader in Halawa begins with the Div-II title game at 4:30 p.m., followed by the Division I championship between Mililani and Punahou at 7:30 p.m.

“First of all, I think it’s going to be one heck of a game,” said Kapaʻa head coach Phillip Rapozo, who’s Warriors loss to both Lahainaluna (18-16) and ʻIolani (29-24). “Lahainaluna is very physical, well coached and very disciplined. They are a lot more physical than ʻIolani.

“ʻIolani, again, well coached. They don’t make many mistakes — the players and the coaches. They are very sound fundamentally and also disciplined.” 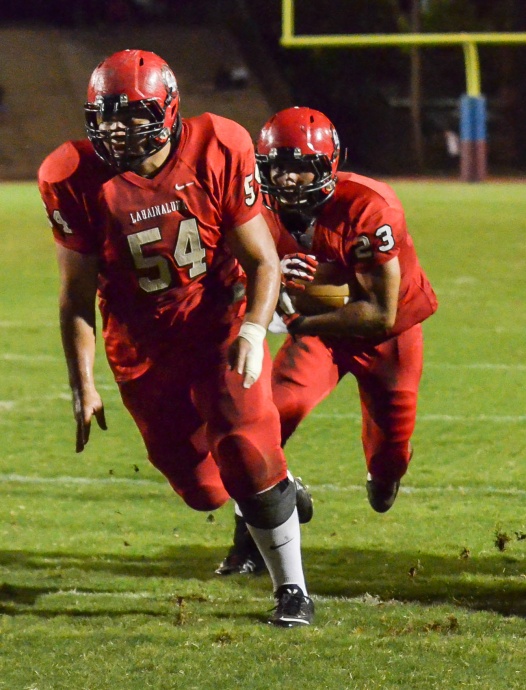 Coach Rapozo declined to pick a winner, adding: “I’m hoping for a good, close game. That would make me feel better after getting eliminated from the tournament.”

The Lunas are coming off their best performance of the year, scoring 45 first-half points in a semifinal win over the Warriors from the Big Island.

“We finally played like we were supposed to play all year, firing off the ball and sustaining blocks,” said Tihada about the Lunas’ offense. “It’s going to be a totally different animal this week though. They are not going to bang heads with us, they are going to try and avoid us, go around us.

“I really don’t think they are going to stand up to us. Their quickness is what worries me and we got to be able to move our feet and sustain blocks.”

“I thought we were a lot more physical than ʻIolani, but they held their own against us,” Ropozo said. “We have a good running game, but our power game didn’t work, and that surprised the heck out of me.” 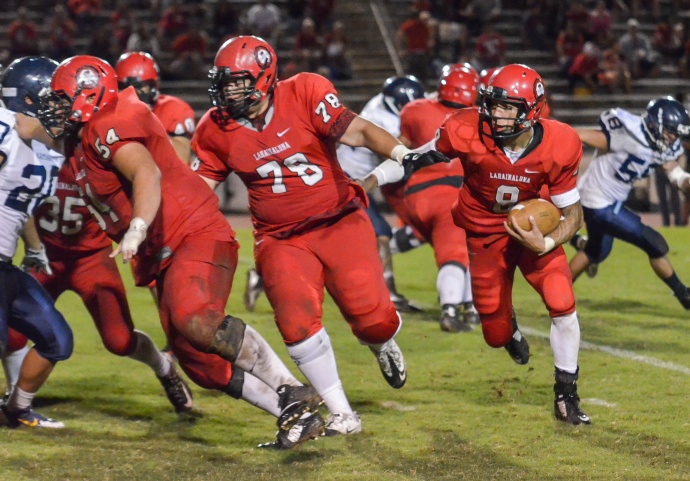 Tihada said sustaining drives and keeping the Lunas’ defense off the field will be critical.

“It’s always easier on offense because you know where you’re going and you’re moving forward versus playing defense and you’re reading and reacting.”

ʻIolani does a good job as far as making adjustments, Watson said.

“So if you take their running game away, they’ll go to a quick passing game. And then their trapping game is outstanding. But I think we match up well with them this year. . . . They will score on us, there is no question about it. It’s going to be a matter of us keeping the score down so our offense can hopefully pull us through.”

“I’m hoping that we do so well that we can use our full offensive package, because some of the plays we got are pretty cool,” said Tihada. “We paid tribute to the old St. Anthony team that ran the Single Wing this past week on the goal line. And we have a whole lot of different things that come off of that (formation), so hopefully we get to use it. We can go anywhere on the field with it and we’ve been working on it for the last three weeks.” 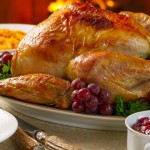 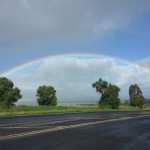 Windward Showers, Front on the Way