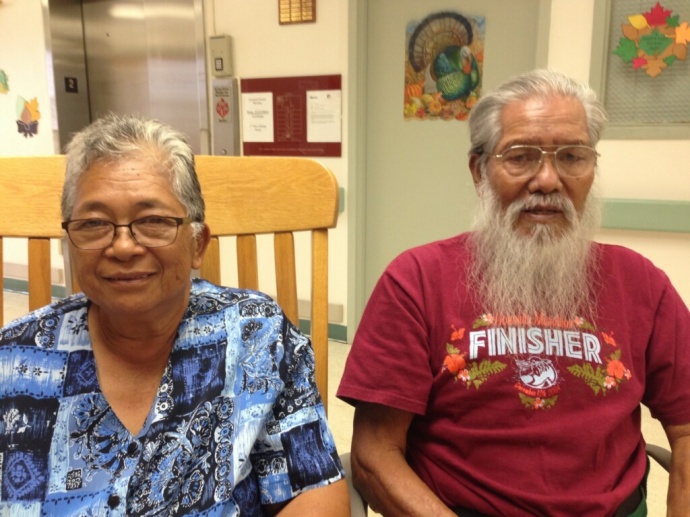 For 50 years, Reuben “Uncle Marco” Eskaran, Sr.  has been spreading the joy of Christmas on Lānaʻi, by dressing up as Santa on Christmas Eve and delivering candy and treats to kids on the island.  Tonight that tradition comes to an end as Uncle Marco suits up for his final time as the “Mahana Santa” before retiring from the role this year.

“He’s in really good spirits, so he says he can,” said Reuben’s daughter Ruby Degamo in a phone interview from the family’s Lānaʻi home this morning.

According to Degamo, her father who turns 80-years-old next week on Jan. 2, 2015, is suffering from dementia and heart disease, and just returned from a month-long rehab on Oʻahu.  According to Degamo, he used to maintain the golf course at the Mānele Bay Hotel before the buyout from Larry Ellison.

“He just slowed down considerably, so we put out the word,” said Degamo, that the Mahana Santa would be ringing his Santa bell for one last time in lieu of a big 80th birthday celebration. “This meant more to him,” she said.

Uncle Marco’s good friend Wilfred Aoki, who has been coordinating the event annually with his friend since the Lānaʻi tradition began five decades ago, will also be present at tonight’s celebration.

According to Uncle Marco’s daughter, “It all began back in 1964 when he played Santa for the Lion’s Club, making appearances at the town square and at the school Christmas program; and visiting children at their homes.”

The two would go house to house and visit kids, delivering candy donated by island stores, and tangerines donated by local families.   “We would bag them up, and off they went to visit; parking the truck at end of block and walking house to house, ringing bells, and giving kids treats.  As my dad got older, he thought it was easier to have it at our home.  So every Christmas Eve for maybe the last 33 years its been at home (on Mahana Place),” said Degamo.

In the early years, Uncle Marco used to decorate the family home with lights and a trademark “throw net Christmas tree” decorated with cans, and can tabs as ornaments.  Posters would also be placed in local stores to invite the community to the Mahana Street home to visit with Santa.

Over the last few years, due to Uncle Marko’s health, the decorations were simplified to just lights, but the spirit of giving continued.  This year, Pine Isle Market donated oranges, and members of the community chipped in by donating candy and making monetary donations so that the family could prepare additional goodie bags for kids.

On average Degamo said the event draws at least a couple hundred kids, who sit on Mahana Santa’s lap and share their Christmas wish for the holiday. 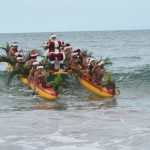 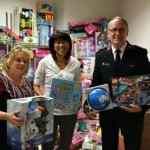