***Updated at 11 p.m. to include information from the National Hurricane Center’s 11 p.m. advisory.***

Hurricane Ignacio has increased in power since the National Hurricane Center’s 5 p.m. update.

As of 11 p.m., Ignacio was 1,205 miles east-southeast of Hilo with an increase of maximum sustained winds listed at 85 mph.

The storm is moving in a west-northwest direction at 13 mph, with forecasts predicting Ignacio to continue on its path throughout the forecast period due to a strong subtropical ridge to the north of the storm that is producing a deep layer of east-southeast steering flow.

Forecasters predict that Hurricane Ignacio will continue to strengthen over the next 48 hours as light to moderate eastern shear, warm water, and a moist atmosphere remains.

As of 11 p.m., NHC has named Tropical Storm Jimena, formerly known as Thirteen-E, It is the tenth tropical storm of the season.

The storm is currently 845 miles south-southwest of the southern tip of Baja, Calif. and is moving west-northwest at 15 miles per hour, a slight decrease from earlier in the day.

Maximum sustained winds associated with Jimena are at 40 mph.

Forecasts expect a turn toward the west with some decrease in forward speed through Thursday and the movement is expected to last through Friday.

NHC officials say that the maximum sustained winds associated with the storm are expected to continue to increase, reaching hurricane strength on Friday.

Ignacio was upgraded from a Tropical Storm to a Category I Hurricane on Wednesday afternoon, Aug. 26, 2015.

The system is now the seventh hurricane in the eastern North Pacific this season.

Ignacio was last located 1275 miles ESE of Hilo, Hawaiʻi and had maximum sustained winds of 75 mph.

Present movement is toward the WNW at 13 mph.  Forecasters with the National Hurricane Center say this general movement is expected to continue through Friday, Aug. 28, 2015.

Additional strengthening is forecast over the next two days.

KEEP IN MIND: It is still to early to tell what kind of impacts Ignacio could have on the state.  It is important not to focus too closely on the exact forecast track as many factors could impact the forecast over the next several days.  It is also important to note that significant impacts from tropical cyclones can extend well away from the center of the storm.

PREPARE: Take this time to review your emergency kit and plans.

Tropical Storm Ignacio continues to strengthen as it inches closer to Hawai’i. As of the National Hurricen Center’s 11 a.m. advisory, the storm was located about 1,365 miles east-southeast of Hilo, traveling west at about 12 mile per hour.

NHC says Ignacio’s current movement is expected to continue through Wednesday night and take a west-northwest turn on Thursday as it is steers around the subtropical ridge.

The storm’s maximum sustained winds have increased to 65 mph, and strengthening is forecast to continue over the next 48 hours. Ignacio is expected to become a hurricane on Thursday.

Light to moderate shear and warm waters over the next handful of days are predicted to be contributing factors to the favorable strengthening conditions.

NHC forecasters report that weakening is expected in the long range due to an increase in shear and less favorable thermodynamic conditions.

Along with the monitoring of Tropical Storm Ignacio, NHC is currently watching newly formed Tropical Depession Thirteen-E in the Eastern Pacific. As of 11 a.m., Thirteen-E was located west of Mexico, a decent distance from Hawai’i.

Thirteen-E was traveling west at about 20 mph with maximum sustained winds of 30 mph.

NHC forecasters say that the environment ahead of the storm is characterized by low shear, very warm waters, and a moist atmosphere. These conditions make strengthening likely throughout the forecast period. Official forecasts note that with steady intensification, the storm could reach major hurricane strength by day five.

Currently, Thirteen-E is located south of a strong mid-level ridge over northern Mexico and the adjacent Pacific waters. The ridge should steer the storm west through day five and potentially begin to turn west-northwest by the end of the forecast period. 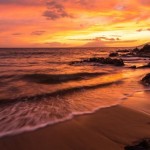 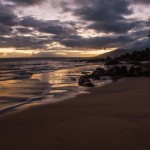