Casanova: A Proud Past, Pizza & Pasta in Makawao 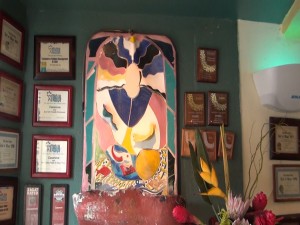 Fountain in entryway of Casanova in Makawao, created by artist Piero Resta. Photo by Kiaora Bohlool.

On the wall when you enter Casanova Restaurant in Makawao, standing out amid the rows of framed awards, is a colorful, mosaic-style fountain. Created by renown Italian artist Piero Resta, it was the first piece of art the owners bought when they opened the restaurant.

“Believe me, we were short on money, and we were looking at each other saying, ‘Really? We want to invest money in that when we were buying pots and pans?,” remembers Giovanni Steven Cappelli, who started Casanova with three friends almost 30 years ago. “But this fountain, I think, is the most delightful welcome that you find when you come in.”

Cappelli says when he and his friends arrived on Maui, “being Italian, one of the things that we contribute to the happiness of the planet is food.” Part of the building on Makawao Avenue was up for lease, and two months later, Casanova Deli opened in 1986, where it still exists today, serving favorites like cappuccino, sandwiches and lasagna. The restaurant followed three years later, when the space next door, formerly known as Partners, opened up.

“The thing that at that time we thought Maui was missing was not just great Italian food, but also good entertainment,” Cappelli says. “In its DNA, the building has a wonderful dance floor, and has always been a place for dancing and for music, we started working on that. The first legacy I worked with then is still alive now, and it is Wednesday Ladies Night.”

Let’s take some dance steps backward for a moment, for a little history on the building itself, and the dance floor that has known about seven decades of fancy footwork. A black-and-white photo on the wall at Casanova shows soldiers gathering outside during World War Two, when the place was called Club Rodeo. Cappelli tells us what it means.

“Marines were camped out on Giggle Hill a few miles from here in Haʻikū and this was the USO; the place where they were coming for rest and relaxation, and that’s where the dance floor started,” he explains. “At that time there was a swing band playing music for them, and 50 years later there was a reunion of marines and the major dinner here at Casanova; even the swing band was the same! The most important thing was the Hawaiian ladies that were dancing with them. They showed up and there were tears in everybody’s eyes. So that tells you what you can expect when you come here. You join a community in a place where this community has its roots.”

These days, the dance floor is still jammin’ although the swing band has since been replaced by deejays, rockers and reggae stars. While the entertainment choices have changed, Cappelli says the food favorites remain consistent. Case in point: Casanova had the very first wood-burning oven on the island back in the ’80s, and it’s still blazing today.

“The pizzas are fantastic. There’s about 18 pastas in the menu,” he says. “People want to eat what they recognize, what they love; they come back to find it again and again. So yeah, we put out specials, my chefs are always coming to me and saying, ‘Can we do something different?’ But you can count on your favorites when you come to Casanova, and they’re executed perfectly by a cook team I’m blessed to say that is with me 10, 15 years.” 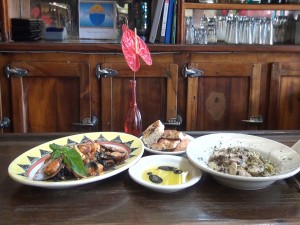 A spread of pasta and focaccia bread at Casanova. Photo by Kiaora Bohlool. 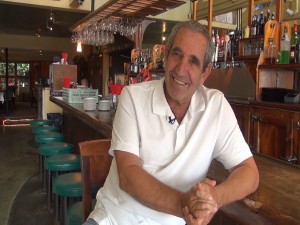 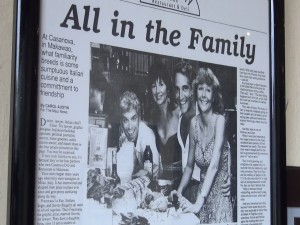 Article on Casanova from 1989. Photo by Kiaora Bohlool. 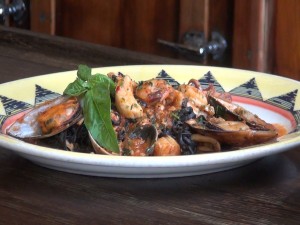 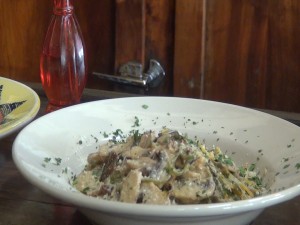 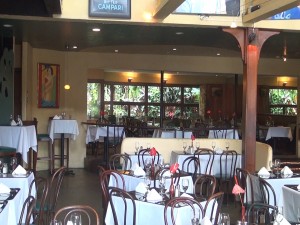 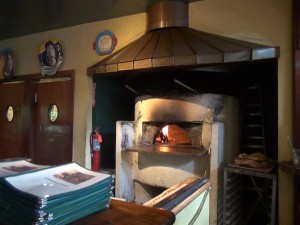 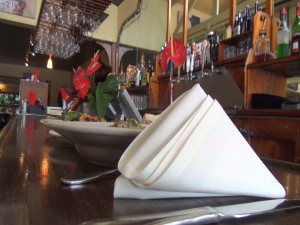 Food on the Koa bar at Casanova. Photo by Kiaora Bohlool. 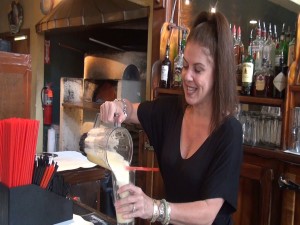 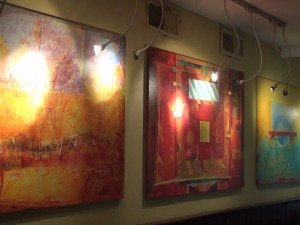 Art on the wall, from Piero Resta’s abstract period. Photo by Kiaora Bohlool. 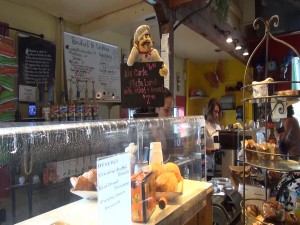 Casanova Deli, which opened before the restaurant in 1986. Photo by Kiaora Bohlool.

As far as personal favorites, Cappelli says the ossobuco, or veal shank, is close to his heart… in more ways than one.

“Really slowly cooked for four to five hours in a rich tomato sauce with wine and spice and herbs, and it gets to the point that the meat, literally, you barely need a knife to cut it out of the veal shank,” he describes. “It is a shank so there’s a bone in the middle. If your doctor allows, you can even eat the marrow. It’s not so good for your cholesterol, but once a month you can do it, and it’s a fabulous flavor!”

The bustling deli opens at 7:30 a.m., with an outdoor patio where morning people sit, chat and observe along Makawao Avenue. Cappelli says lunchtime attracts mostly visitors exploring upcountry, while locals are “the backbone” of the dinner scene.

“In the evening and the night, the closest hotel is about 25 miles away, so you need really have to a strong reason to come upcountry to do that. So it’s pretty much a family place,” he says. “Kids are allowed to make their own pizza dough in the pizza oven, so they grow up, and come, you know, ‘I used to come here when I was six or seven and stretch my own pizza dough at your pizza oven!’ It is that kind of feeling.”

Speaking of feelings, Happy Hour runs from 5 to 6 p.m. on weekdays, and the main attraction is a half-liter carafe of mojitos, margaritas, Pinot Grigio or Chianti wine for $5.

Cappelli laughs, “When we decided to do happy hour, we say, ’Well, we make it happy or we don’t make it!’”

The shiny, historic Koa wood bar is a point of pride, along with the “plaza” area between the bar and dance floor, which Cappelli says is great for socializing with old friends, and making new ones.

“It is what I’m missing most in Maui; we don’t have a plaza, we have a crossroad, so we created the plaza when you come into Casanova, with these four bench tables facing each other,” he explains. “Maybe you can start communicating while you have dinner also with the people who are not sitting at the table with you.”

The memorable fountain in the entryway may have been the restaurant’s first art purchase, but it wasn’t the last. Every piece of artwork in Casanova was created by Piero Resta, a legendary Italian photographer and artist who made Maui his home for decades. Resta died on Sept. 8 at the age of 75. He was best friends with Cappelli, who proudly points out three vibrant paintings on the wall from Resta’s abstract period, which he says illustrate the tone of Casanova: classic, but creative.

“Don’t ask me to understand them; there is nothing to explain. You feel them,” he says.

Complete with a private dining room dedicated to Resta, the upscale bar and restaurant Bistro Casanova opened in Kahului six years ago. Cappelli says two restaurants are enough, so there are no plans to open another venue. His role has evolved and changed after so many years of dedication to Casanova; these days, his primary job is to listen. He says the beauty of Maui helps reinvigorate his passion for the business and “keep it fresh.”

“I wake up every morning and pretend it’s the first day, I drive here and say, ‘Okay this is your first day on the job,’” he laughs. “Sometimes it gets a bit difficult, but I need to say that the drive from my home to here is so beautiful.”

As of 2016, Casanova will have existed for 30 years in Makawao. For Cappelli, one of the best gifts has been connecting with and learning from young people, saying “it keeps me young.” But he’s also open to the possibility that one of those young people could one day take his place at Casanova. Not yet. But someday.

“Eventually, one young, possibly Italian guy is gonna come in, beautiful and full of energy, and tell me, ‘I wanna be you.’ Up to now, I’m happy to be me, but one day I realize even Casanova will have to have a generational change,” he says. “All my people know that: eventually, young, fresh energy will come in to do whatever they feel like doing. I am making up the lipstick every night so we look good.” 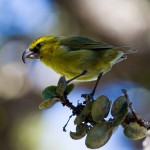 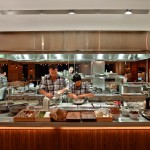