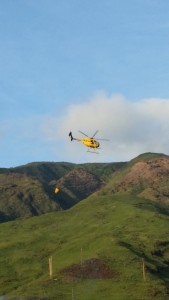 At 4:37 p.m. Friday afternoon, firefighters responded to a report of smoke in the Olowalu area of West Maui.

At 4:53 p.m., Lahaina firefighters arrived to find heavy smoke higher up in the Olowalu Valley, but could not see any flames.

The fire department’s Air 1 helicopter was launched and confirmed a working brushfire burning about a half-mile mauka of Olowalu Store.

About 10 acres have been burned so far.

At 8:30 p.m., firefighters had the fire about 70% contained, but are concerned with strong winds blowing towards homes about a quarter mile away.

Rough terrain is making it difficult for vehicles to access the fire so firefighters are walking the fireline by foot and are mopping up with hand tools and waterpacks carried on their backs.

Fire crews will remain at the scene throughout the night and will reassess the area in the morning.

While making water drops, Air 1 did report seeing a downed electrical power line in the area of the brushfire, but it’s still unclear what may have started the fire.

Crews will continue the investigation tomorrow.

A total of 19 firefighters responded.

Three companies, a water tanker and a battalion chief from Napili and Lahaina responded to the fire.

A hazmat crew and water tanker from Kahului also assisted. 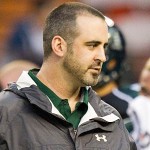