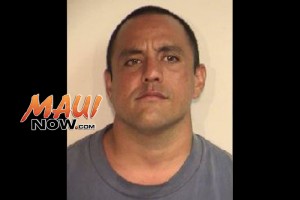 A man accused of arson at a Kahului gas station was arrested and charged over the weekend, and made his first appearance in Maui District Court today, police said.

Brandon Oania, 32, of Kahului, was located by Wailuku patrol officers at around 1:37 a.m. on Saturday, Feb. 6, 2016, and arrested for allegations of first degree arson, according to police reports.

The charge stems from an incident reported in the early morning hours on Friday, Feb. 5, 2016.

Police say Wailuku patrol officers responded to a report at 3:32 a.m. of an arson in progress at 16 Hobron Avenue in Kahului.

According to police reports, employees yelled at the suspect who allegedly fled on foot towards the Hāna Highway. Officers canvassed the area for the suspect but were unable to locate him at the time.

Through investigation police say the suspect was identified as Brandon Oania, 32, of Kahului, and an all-points-bulletin was issued for his arrest.

The business did not sustain any damage from the incident.

The incident comes on the heels of a separate arson reported on Sunday, Jan. 24, 2016 at the Tesoro Gas Express in Kahului.

Maui police arrested Oania and his father, Joseph, on suspicion of first degree arson in connection with that incident, but both were released pending further investigation. 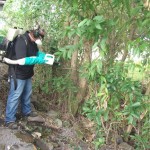 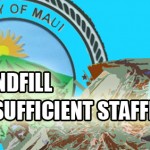