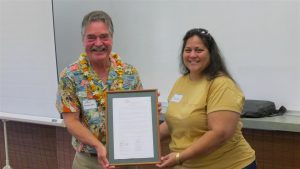 The meeting celebrated Executive Director John Andersen, who is stepping down, and outstanding volunteers Dawn DeRego, board president; and Justin Hughey, board VP and NHOM’s first homeowner.

A board resolution was presented to Andersen, recognizing him as an instrumental founding member and honoring him for his years of dedicated service and commitment.

Andersen served as NHOM’s first executive director from 2006 to 2016 and principal broker from 2009 to 2016. He is responsible for creating 33 single-family homes in Maui County that will remain affordable in perpetuity through the Na Hale O Maui Community Land Trust model. 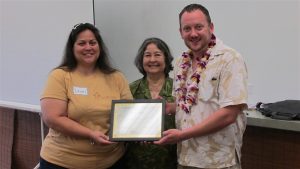 Dawn DeRego (left), Na Hale O Maui’s outgoing president, and Cassandra Abdul, NHOM’s new executive director, present Justin Hughey with a certificate of appreciation, honoring his six years of service as a board member with NHOM from 2010 to 2016. NHOM photo.

President DeRego presented a certificate of appreciation to Hughey for his six years of service (2010 – 16) on the board of directors.

Executive Director Cassandra Abdul presented a certificate of appreciation to DeRego for her six years of dedicated service (2010–16) on the board of directors.

The 2016-17 NHOM board of directors was as selected at the meeting. The officers are Michael Trotto, president; Bruce U‘u, vice president; Dave Ward, secretary; and Paul Felix, treasurer.

General & Public Directors Michael Spalding and Ray Phillips have returned to the board after a one-year hiatus. 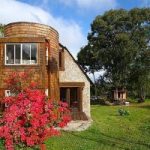 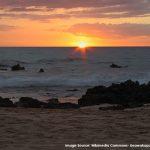 Live in Luxury in South Maui at Keawakapu Beach