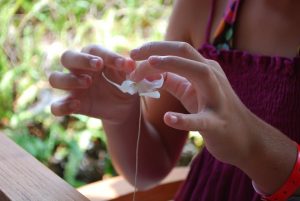 A group on Maui is organizing to make a mile-long “lei of aloha” for the City of Orlando, Florida, the scene of Sunday mornings mass shooting in which 49 people were killed and 53 more were injured.

This same group organized within days of last November’s Paris bombing to make and ship a mile-long lei to the City of Light.

They are now gathering at Nalu’s Restaurant in Kīhei to do it again.

“This is about community and unity,” said Ron Ponzo, owner of Nalu’s.

“We need ti leaves and more volunteers,” Mulligan said. “Ron is letting us use his restaurant’s patio and we’re going to put up tents for shade, but it’ll be warm so be sure you bring your own water.”

Mulligan said if you don’t know how to make a lei there’ll be people on-hand to teach you.

Lei-making will begin Wednesday, June 15, at around 1 p.m. and then continue each day from 7 a.m. to 10 p.m. until the project is completed.

He said it took 3.5 days to finish the Paris lei.

When completed, a kumu and Maui delegation will hand-deliver the lei to Orlando.

To help with the expenses, donate through The Cynthia Rose Foundation, the nonprofit acting as the fiscal agent. 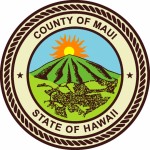 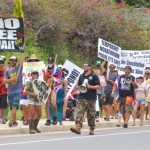