Bears Beat Lunas on Strength of First Half TDs, 19-13 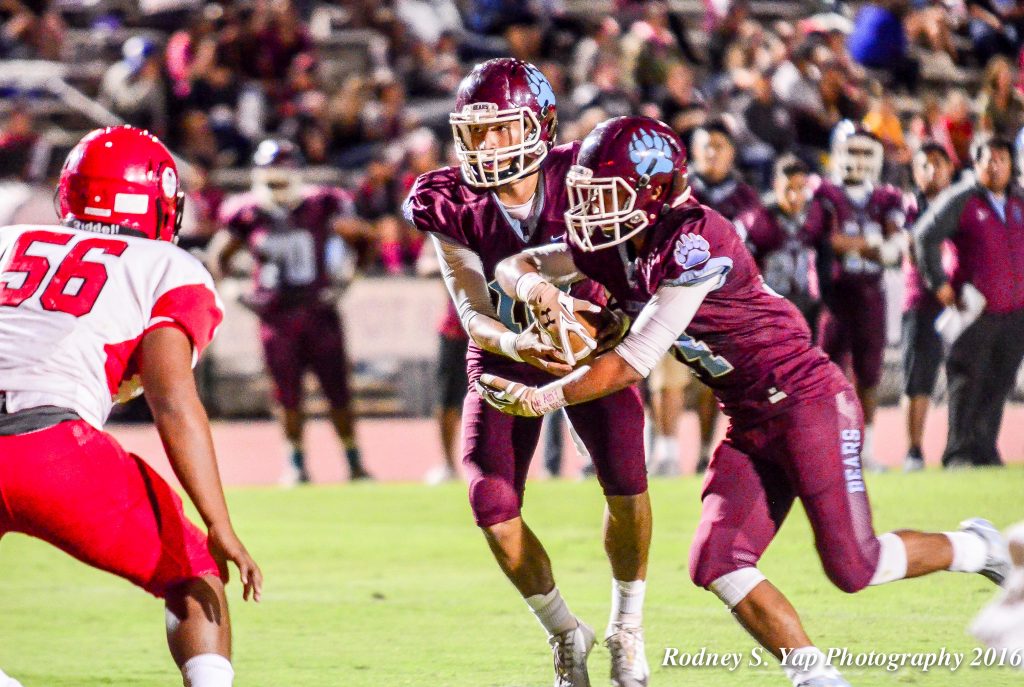 While the outcome of Saturday’s rivalry game did not affect the MIL standings or the immediate future of both teams, it did matter as far as official bragging rights go. And Baldwin evened its head-to-head record against the Lunas to 5-5 since 2012. 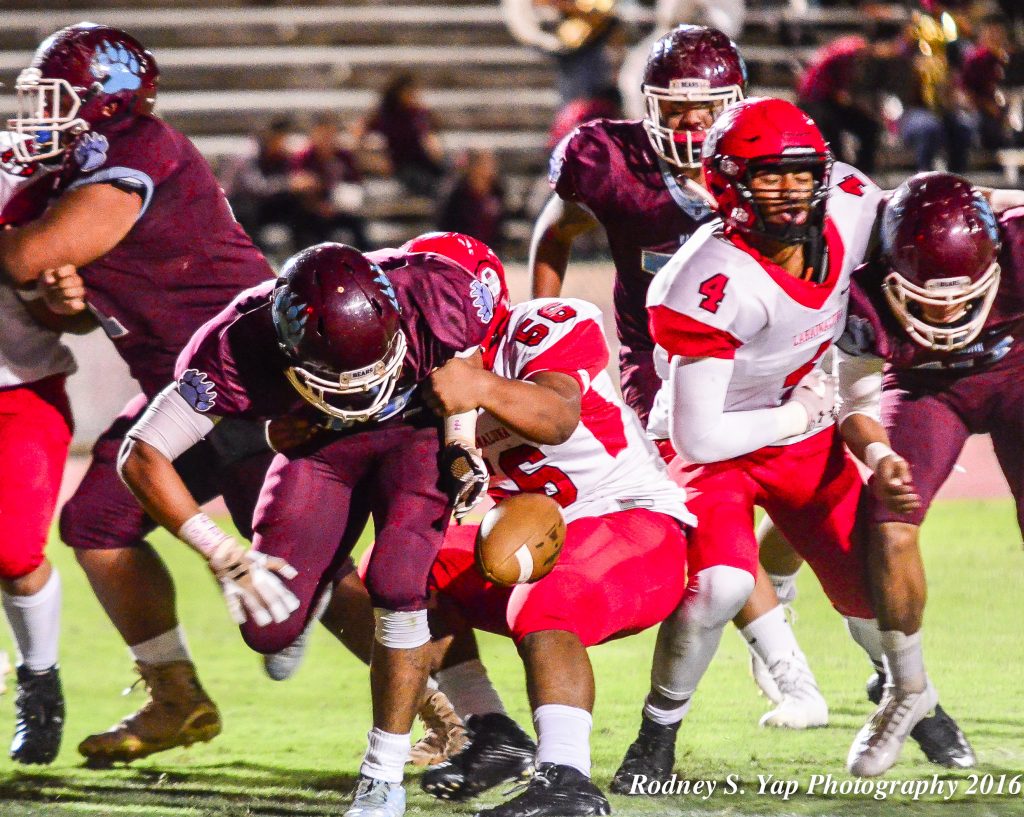 Lahainaluna’s Viliami Hafoka rips the football out of the hands of Baldwin quarterback Chayce Akaka near the goal line Saturday at War Memorial Stadium. Photo by Rodney S. Yap.

Lahainaluna, which rallied to take the lead twice in the second half the first time these two teams met in round one before the Bears sealed a 29-27 win on a 23-yard field goal with four seconds left, cut Baldwin’s 19-3 halftime lead to a touchdown with 1 minute, 42 seconds remaining. But an unsuccessful onside kick enabled the Division I team to run out the game clock.

The perennial Division II MIL champion Lunas drove the ball to the Baldwin 13-yard line with just over nine minutes to play but had the ball stripped by Baldwin’s Leroy Mafatini Jr.

The unbeaten Bears (7-0) face Maui High on Saturday, Oct. 22, with a shot to clinch the MIL Division I championship and possibly host a first-round state championship tournament game. A win by Maui High would give the Sabers the second-round championship and force a playoff game on Friday, Oct. 28, for the overall title. 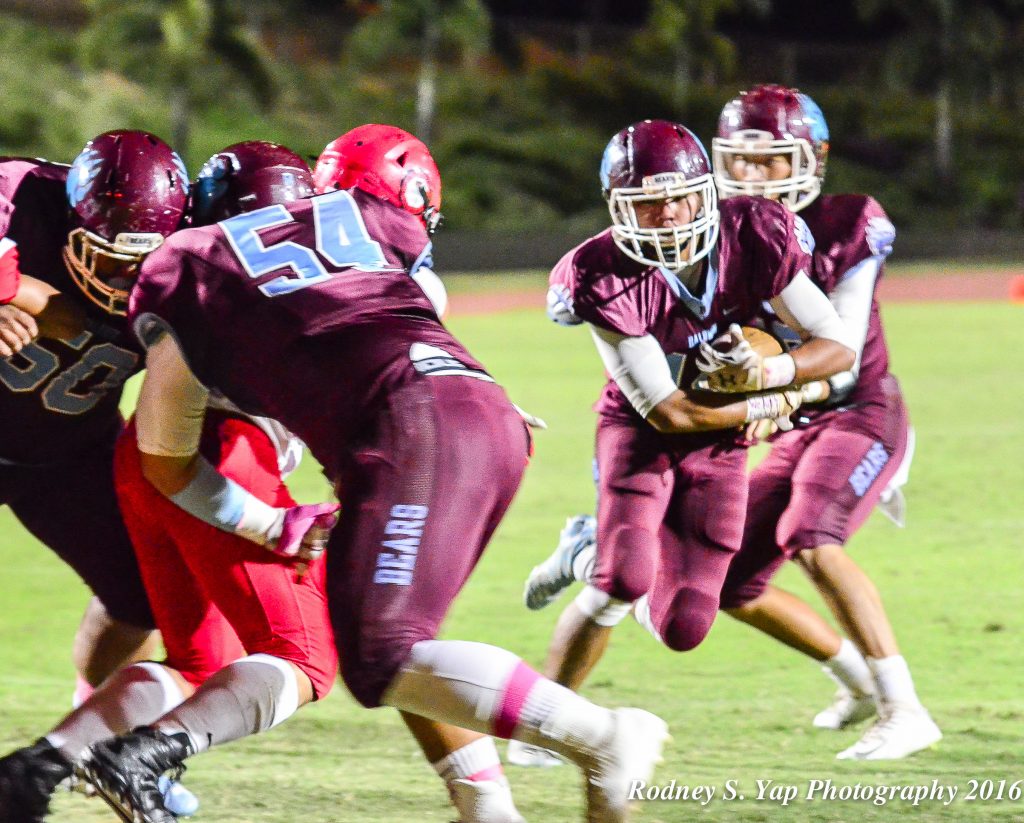 The Lunas (4-3 overall) have already clinched the Division II championship and will be making their 10th consecutive state tournament appearance.

Corpuz scored on a pair of 1-yard runs in a span of two minutes late in the first quarter to give Baldwin an early-game cushion. His first score capped an 8-play, 41-yard drive and the his second touchdown was setup by Jansen Roldan’s interception of Lahainaluna’s Etuati Storer at the Lunas’ 35.

On both touchdown runs, Corpuz ran behind Baldwin’s MIL all-star guard Jared Paranada, who also saw action on defense in the first half, but did not return to the offensive side of the ball in the second half.

Corpuz, a 5-foot, 9-inch, 170-pound junior, entered the game with 203 yards rushing on 33 carries. He was awarded the starting role at running back after the Bears’ top rusher Kamaki Gouviea was ruled academically ineligible. He was on the sidelines and hopes to be back for the Bears’ postseason should they qualify next week. 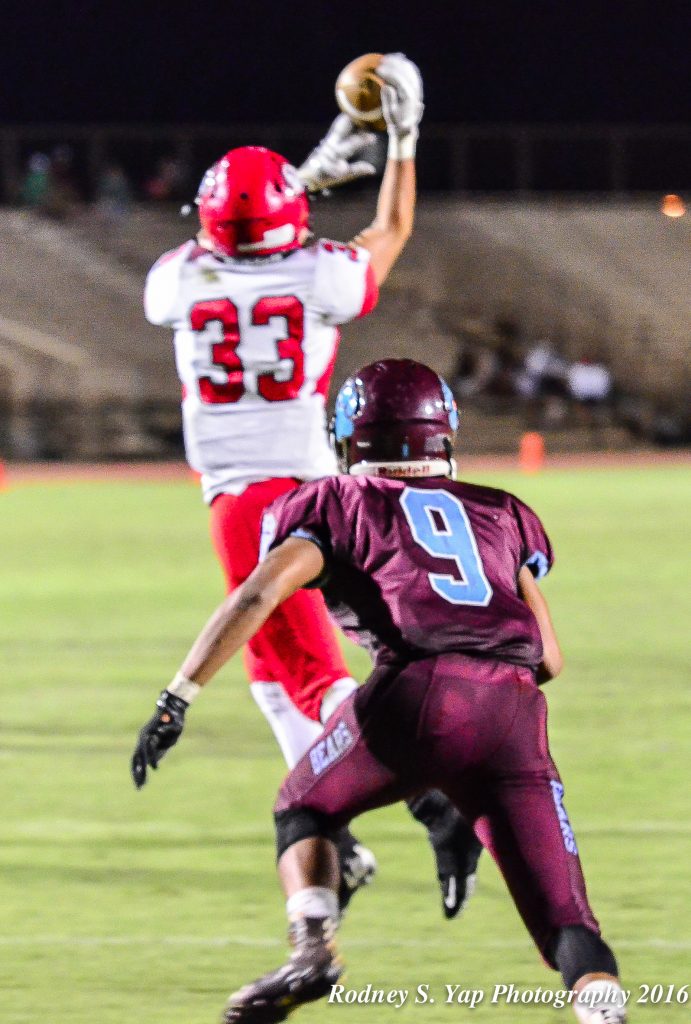 Lahainaluna’s Joshua Tihada could not hang on to this pass as Baldwin’s Damien Defrancia closes in to break up the play. Photo by Rodney S. Yap.

Despite sitting out last week’s game with a sprain ankle, Gouviea was No. 2 in MIL rushing with 742 yards and five touchdowns going into Saturday’s contest.

Baldwin’s part-time starter and No. 2 running back Bishop Wickes was nursing a leg injury and did not play until the fourth quarter. He was efficient, but not 100 percent, in his limited action.

Lahainaluna’s defense frustrated Baldwin quarterback Chayce Akaka throughout most of the game, but the senior playmaker managed to find the sure-handed Shawn Silva for a 5-yard touchdown pass with 21 ticks left in the first half. A Lunas’ fumble near midfield helped set the table for Baldwin’s scoring drive and Akaka’s 30th career touchdown pass.

The Lunas rallied early in the second half and got a monster 43-yard touchdown run from Elijah Ragudo midway through the third quarter to draw to within 19-10. 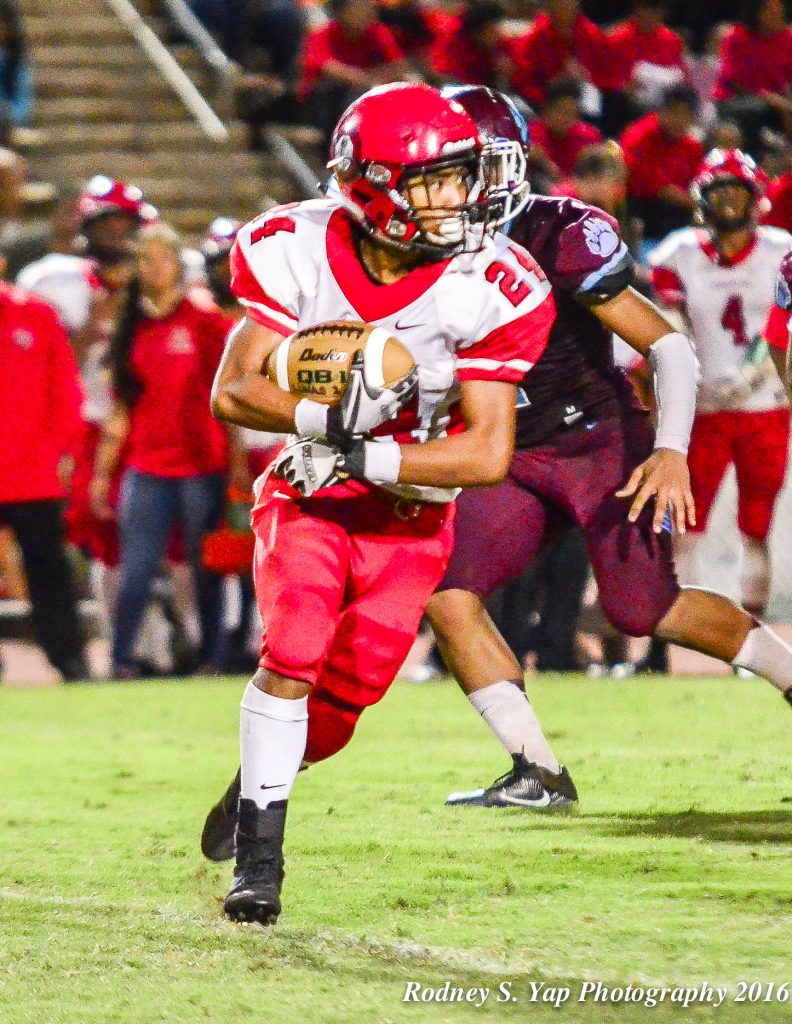 Lahainaluna’s Elijah Ragudo scored his team’s only touchdown on a 43-yard run in the third quarter Saturday. Photo by Rodney S. Yap.

Lahainaluna’s final points came on a 34-yard field goal by Pablo Rico with 1:41 to play, the 3-pointer was Rico’s second of the game. He split the uprights from 29 yards to give the Lunas their first points of the game with 5:51 in the second quarter to make it 12-3.

Both teams hurt themselves with penalties. Baldwin was whistled 15 times for 133 yards and Lahainaluna eight times for 80 yards.

The Lunas celebrate homecoming against winless King Kekaulike on Friday, Oct. 21. Both the Lunas-Na Alii game and The Big Game II between Baldwin-Maui High on Saturday, Oct. 22, will start at 7 p.m. and be broadcast live on Maui’s ESPN 900AM.

Note: All individual and team statistics were complied by Robert Collias of The Maui News. 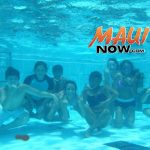 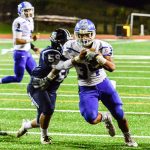