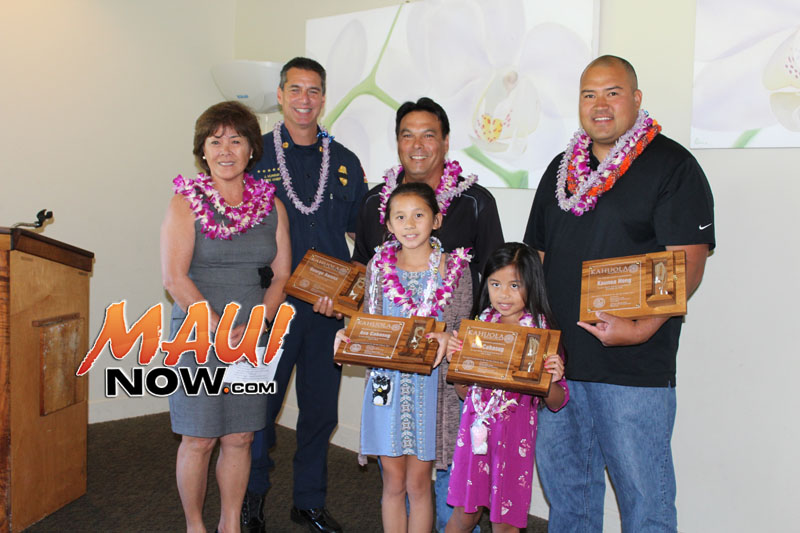 Four Maui residents were honored for their heroism and quick action during two separate emergencies reported in 2016. Each of the individuals received the Kahuola Award for their actions from Maui Fire Department Chief Jeff Murray and the Fire and Public Safety Commission. The Kahuola Award is given “for performing a selfless act probably resulting in the saving of a human life.”

Seven-year old Mia Cabasug and her nine-year old sister Ava were honored for their efforts in helping a two-year olb boy who was observed struggling in a pool at the Maui Banyan on July 3, 2016.

Since she is not a strong swimmer, Mia ran to get her old sister, Ava to help. Officials say Ava jumped in to get the boy out of the pool and both sisters took him to a nearby adult.

Fire officials say the youngster was unresponsive and lethargic, then started vomiting large amounts of water. When Ladder 14 fire fighters and the AMR medics arrived on scene, they took his vitals and found a normal pulse. The young boy was then transported him to the hospital.

In a separate incident, an off-duty Maui Firefighter and his stepfather were honored for their efforts in rescuing a woman who was found sleeping during a home fire at her Kīhei residence.

MFD Fire Fighter Kaunoa Hong was visiting with his stepfather, George Awana, on Dec. 18, 2016, when they heard about a fire a few houses down the street. The incident was reported at around 2:15 p.m.

Hong and Awana raced to the residence to investigate and then searched for a way to gain entry into the home to check for any occupants that still might be inside. They found an unlocked sliding door in the backyard and entered the structure, splitting up to search each half of the home.

Awana found a woman sleeping in a bedroom and called for Hong to help. Both men walked the woman out of the home and Hong reentered the residence to complete the search of the entire home as firefighters from Engine 6 arrived on scene.

The awards were presented to each of the four recipients on March 16, 2017 at a luncheon hosted by the Fire and Public Safety Commission at the Maui Lani Café O’ Lei restaurant.

More information about the award and a list of previous recipients is available at the following direct LINK. 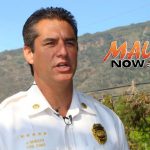 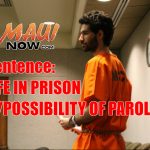 Capobianco Sentenced to Life in Prison With Possibility of Parole