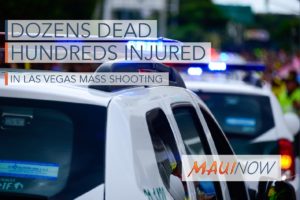 A gunman on the 32nd floor of the  Mandalay Bay Hotel and Casino in Las Vegas Strip killed at least 58 people and wounded more than 515 in a crowd of thousands of country music fans during the last day of the Route 91 Harvest Festival outdoor concert on Sunday, Oct. 1, 2017.

This is the deadliest mass shooting in modern U.S. history, according to  news sources.

SWAT teams quickly descended on the concert and the casino, and officers used explosives to get into the hotel room where the suspect was inside, authorities said.

The gunman, found dead at the scene, was identified as Stephen Paddock, 64, from Mesquite, Nevada. Investigators are still trying to discern Paddock’s motive.

No international terrorist group connections have been identified.

“Today, our hearts are with the people affected by this tragedy, and with all of Las Vegas,” said U.S. Sen. Brian Schatz (D-Hawai‘i) “But warm words are not enough. Thoughts and prayers won’t stop this from happening again. It’s time for Congress to finally stand up against gun violence and take action so this never happens again.”

President Trump called the attack “an act of pure evil” and said the FBI and Department of Homeland Security are working with local authorities in the investigation. He will travel to Las Vegas on Wednesday.

“I am shocked and terribly saddened by the news of an unbelievable act of mass murder in Las Vegas. We call it The Ninth Island because we have so many family and friends living there, and most of us have visited for entertainment or for business. Today we grieve with those who have lost loved ones and pray for the injured,” said Gov. David Ige.

“The people of Hawai‘i have a particularly close affiliation to Las Vegas, both as a favorite vacation spot and where many former Hawai‘i residents now make their home,” Chief Justice Mark E. Recktenwald said. “Our heartfelt thoughts and prayers go out to the victims and their families affected by this devastating tragedy.”

At the direction of the president, Gov. Ige has ordered that the U.S. flag and the Hawai‘i state flag will be flown at half-staff on from Oct. 2 through Oct. 6, 2017, to honor the victims of the mass shooting.

Scroll Down to Read 126 Comments 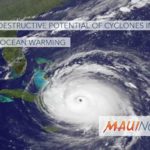 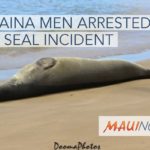