Motorists reported delays and congestion of one to two hours on opening day of the newest phase of the Lahaina Bypass  on Monday April 23.   Transportation officials largely attributed delays on Honoapiʻilani Highway to utility work being done in Olowalu, which should be done by next week.  They also say it takes time for drivers to get used to the changes. Crews from the state Highways Division say they will continue to monitor traffic conditions over the next three weeks.

A power outage affected more than 9,000 customers in various parts of Maui on Friday, April 20 — West, South, East, Central and Upcountry.  The power went out around 8:40 a.m. after an indicent on the electrical system triggered an automatic “load shed” or safety reaction that starts to drop circuits around the island to prevent damage to the system and possibly a larger outage.  Power was restored to all customers within one to three hours.

A coalition on Maui has launched a “15% for the Future” campaign, which is petitioning Alexander & Baldwin to donate or allow the sale of former sugar cane lands in Central Maui to support affordable housing and farming.  The “Hukilike No Maui: Together for Maui” Coalition has identified lands in Puʻunēnē and Hāliʻimaile that it wants in the hands of local entities to establish small-scale agriculture and affordable housing for Maui residents.  The Coalition has also identified areas as prospects for cultural and environmental conservation, including the Waiʻale Reservoir, Waiʻale Sand Dunes, Māʻalaea Bay Coastline, Keālia Pond, Baldwin Beach Park and Hoʻokipa Beach Park.  Get more details at MauiNow.com.

University of Hawaii Maui College is the first UH campus to achieve “net-zero”…meaning it produces as much energy as it consumes.  It held a lū‘au this week, celebrating the fact that UHMC will produce, store and use 100% renewable energy on its campus by this time next year.   Solar panels were installed last year, and more are going in to complete Phase 2 of the net-zero project, which has reportedly offset 30% of the campus’ total energy consumption to date.  Leaders say the achievement has gained UHMC national recognition as an institution that walks the talk on sustainability.
Kiaora Bohlool
Kiaora Bohlool has been a journalist since 1998. With chefs in her family, she has a lifelong appreciation for food... 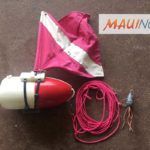 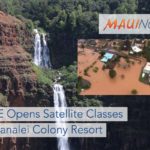