The briefs were filed in two lawsuits over President Trump’s attempt to eliminate 85% of Bears Ears and approximately half of Grand Staircase-Escalante from the monuments. The President’s action, which Attorney General Suzuki argues is illegal, would effectively rescind a national monument for the first time in US history.

In the amicus briefs to the US District Court for the District of Columbia, Hawaiʻi and ten other states assert that the monument reductions overstep presidential authority and upend the purpose of the Antiquities Act of 1906, which delegated authority to the president to preserve the nation’s archaeological, historic and scientific resources as national monuments.

They also argue President Trump’s rescissions upset the relationship between the states and the federal government regarding managing federal lands within states’ borders.

“The President does not have the authority to rescind a national monument and we stand with our colleagues to protect these treasures,” said Attorney General Suzuki.

The US District Court has not yet set a date for oral argument.

A full copy of the briefs are available here. 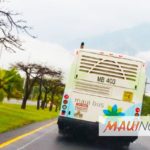 Adjustments Made to Some Central and West Maui Bus Routes