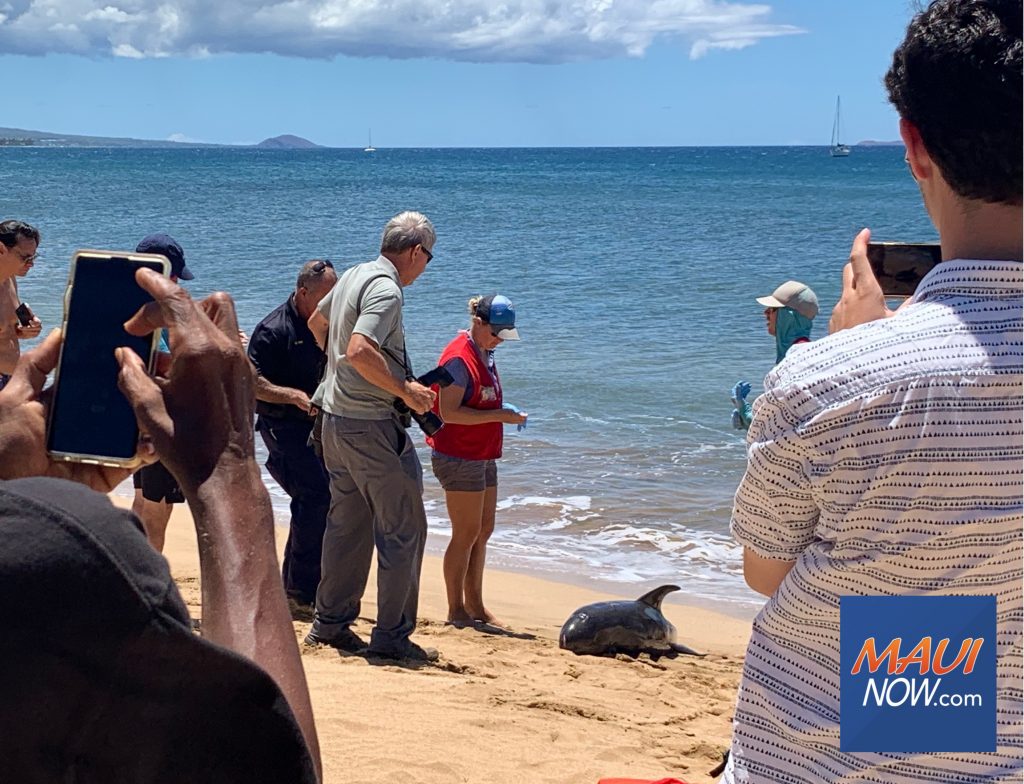 Nearly one dozen cetaceans, believed to be melon-headed whales, stranded themselves along Maui’s south shore on Thursday.  Of the 11 that came to shore, six were re-floated, four were euthanized and one baby calf was retrieved lifeless from the water.

The stranding began at around 5:30 a.m. on Thursday, Aug. 30, at the “Sugar Beach” area of South Maui.  The calf came ashore just after noon about a mile to the north of the initial stranding site.

Experts from NOAA Fisheries say the nearby Māʻalaea Harbor has been a common stranding location for both pygmy killer whales and melon headed whales in recent history.

“Back several years ago in around the 2007 area (I believe it was) there was six pygmy killer whales that had come into Māʻalaea and over the course of several days, the numbers of days, the numbers of animals that were milling in the bay decreased to the point where one individual animal stranded. So we have had mass stranding-like behavior occur in Māʻalaea Harbor before.”

Schofield says the location may have caused disorientation, but that the animals “obviously have something debilitating going wrong with them” to cause them to go towards shore.

According to Schofield, a mass stranding event of pilot whales occurred at Nāwiliwili Harbor at “Dukes Beach” on Kauaʻi in October of 2017.  There were 17 milling, and five individuals stranded–two were on the beach and three were found floating dead in the harbor, according to Schofield.

Prior to that, in 2004, there was a near mass stranding event of melon headed whales in Hanalei Bay on Kauaʻi, where there was about 150 animals inside the bay, but only one individual actually hit the beach and stranded–the others all were able to get out to sea, according to NOAA Fisheries officials.

Prior to the Kauaʻi strandings, Schofield says the last one was in the 1960s and there were some in the 1950s.  “So it’s rather rare for us here in Hawaiʻi to have mass stranding events, but they do happen,” said Schofield.

There have been reports of single strandings that are more common, including one at the same area of “Sugar Beach” that we reported in 2016.

Crews will continue to monitor the area today for activity.