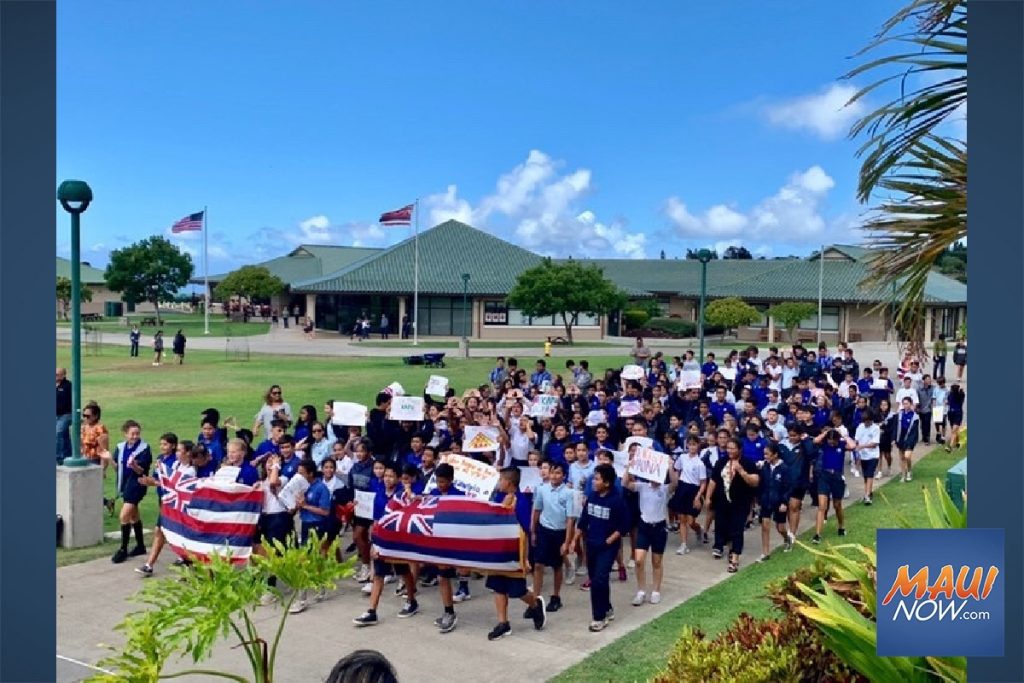 The demonstration was staged in response to a video of officers sawing off a Hawaiian flag from the door of a structure built near the ongoing protest encampment at the base of Maunakea.

Law enforcement officers were tasked with removing the structure because it was “unpermitted and presents potential health, safety, and environmental concerns,” according to officials with the Department of Transportation.

Kui Gapero, a KSM kumu that led the walk-out, called the cutting of the flag a “disrespectful act.”

“I had shown our students a video of today’s actions on the mauna and their jaws literally dropped,” Gapero said.

“They felt empowered to do something.”

The 6th and 7th graders quickly made posters, gathered flags, and marched through the middle school campus.

“One thing led to another and our high school students joined in,” Gapero said.

The demonstration culminated in a series of songs, chants, and hula at the high school campus.

Gapero said the gathering brought tears to the eyes of many.

“It was an amazing way to draw all of our energy together to support and uplift our lāhui,” Gapero added.

According to Attorney General Clare Connors during a press conference held earlier that day, tearing the flag was the “only option” because it was nailed to the buildingʻs door.

“There was no way to safely remove it,” Connors said.

“There was no intent to desecrate the flag…there was no option but to cut through the flag in order to get into the facility to do proper safety checks.”

Connors noted that officers “went to great lengths” to carefully remove a second Hawaiian flag that was mounted on the top of the structure.

“A state employee had to get into a piece of equipment, get hoisted up, and then carefully saw it off the pole so that the flag could be respectfully removed,” Connors explained.

Still, the sight of a sawed-off flag offended many, including KSM alumnus Ionatana Tua.

“I saw it as an attack on our spirit as kānaka,” Tua said.

“This is psychological warfare and itʻs infuriating and traumatizing. How much more do we need to endure until we’re treated with respect and dignity on our own ‘āina?”

Yesterdayʻs state action comes as the anti-TMT protest site at the base of Maunakea nears two months.