Late Friday night, a majority of the Maui County Council voted in favor of a settlement to withdraw the county’s appeal to the U.S. Supreme Court challenging the federal Clean Water Act’s protections against ocean pollution from the county’s Lahaina wastewater plant.

The council’s Governance, Ethics, and Transparency Committee, led by Chair Mike Molina, voted 5-3 in favor of the settlement. Those voting in favor included Chair Mike Molina, Keani Rawlins-Fernandez, Kelly King, Tamara Paltin, and Shane Sinenci. The matter will now go before the council for a final vote.

In his closing remarks before the vote, Molina stated that he held the extensive hearings to allow a “fully informed decision.” Noting how long the problems with the Lahaina plant had continued unresolved, he concluded: “I don’t want to wait another 12 years. Enough is enough.”

Maui Mayor Michael Victorino issued a statement over the weekend expressing disappointment in the decision to settle.  He said the 9th Circuit Courtʻs ruling to expand the Clean Water Act could have “severe” effects on Mauiʻs “already tight housing market.”

On Friday, the committee heard from DOH Director Bruce Anderson, who said the DOH had no intention or need to add to the controls on cesspools that have existed for decades.  He also stressed the need to maximize reuse of the treated wastewater and return to the “original intent” that injection wells be used only as an emergency backup.

Isaac Moriwake, managing attorney of Earthjustice’s Mid-Pacific Office said, “The message came through loud and clear that the state can help the county find the way forward—but that doing nothing and letting the Lahaina plant continue to pollute the ocean should no longer be an option.”

The settlement approved on Friday is a proposal from the Maui community group plaintiffs, with some amendments. Before voting to approve the settlement, the committee voted against retreating into executive session to hear a supposed alternative “offer” from Mayor Victorino. Chair Molina reportedly submitted a written request that the mayor provide his offer in advance and in a public forum.

The environmental law firm, Earthjustice, issued a press release saying the council “has the ultimate legal authority to settle cases such as this one, which have financial impacts on the county.” 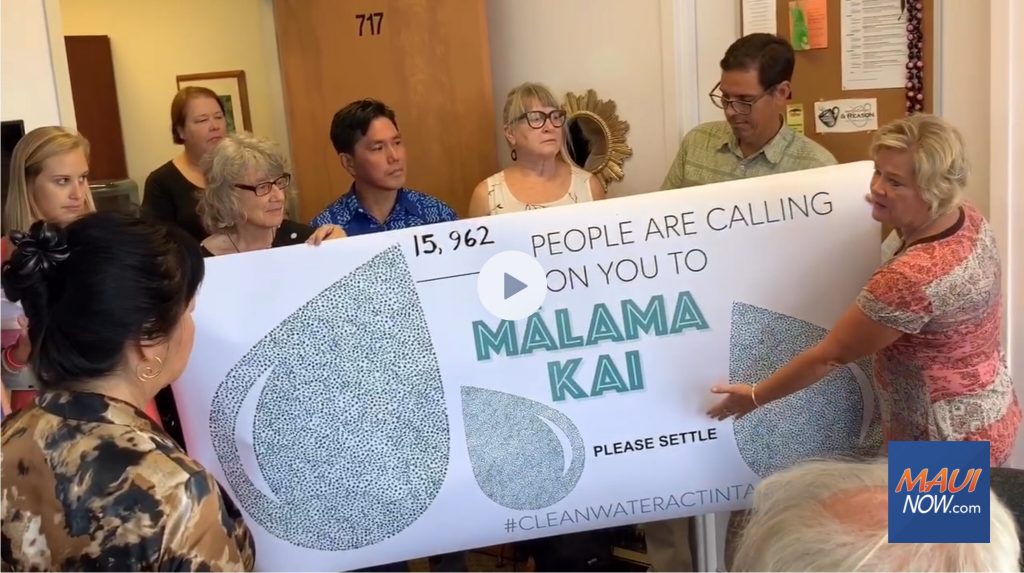