The evening featured an Apples for Education Silent and Live Auctions; the first-ever Price Is Right, STEM Edition game; and memorable presentations by Maui County’s STEM students, teachers, and stakeholders.

Winners of two prestigious 2019 STEM awards were also announced: the Daniel K. Inouye Innovation Award which recognizes outstanding students who have demonstrated the most innovative use of STEM tools and programs to serve and improve our community, and the Lesley and Pawel Czechowicz Award, which recognizes exceptional educators in Maui Nui.

The fundraising event will help to advance MEDB’s STEM education programs from kindergarten to careers; as well as enable MEDB to continue to pursue meaningful pathways that benefit the lives of residents in Maui County and statewide.

This is the second year the Czechowicz donated $15,000 to honor outstanding educators with a cash prize. Recipients of this year’s Czechowicz Award went to: Elizabeth Conroy-Humphrey of Lānaʻi High & Elementary School, Jennifer Suzuki of Maui Waena Intermediate School, and David Kawika Gonzales of Kaunakakai Elementary School. Each received $5,000 which they can spend for their own personal use.

Conroy-Humphrey has been the 6-12 academic college and career guidance counselor for the past six years at Lānaʻi High & Elementary School. She supports students in middle school to gain experience and exposure to careers and guides their selection of high school courses to prepare them for career and college opportunities including internships, dual enrollment courses, and scholarships. She has been integrating STEM for students in grades K-12 for 15 years.

Suzuki is a STEMworks™ lab teacher at Maui Waena Intermediate School. Her students have garnered both state and national awards for video and television production and creative media, as well as produced videos and created websites for nonprofit organizations. The media program is affiliated with Student Television Network, Hiki No (Hawaiʻi’s PBS student news weekly broadcast), along with PBS Student Reporting Labs.

Gonzales has been teaching STEM and Computer Science in the classroom for the past 10 years. With an array of professional development workshops and industry connections, David is trained to incorporate topics such as coding, virtual and augmented reality, and other technology into the classroom. With his training, he created a program at Kaunakakai Elementary School called “weTEACH STEM,” where his students become the teachers and teach other students the fundamentals of robotics, programming, and coding. Through their efforts, the school has been able to teach STEM to all 3rd to 6th grade students.

The team captured first place in a Coral Hackathon during the Hawaiʻi STEM Conference, presented by MEDB’s STEMworks™, held at the Hawaiʻi Convention Center on May 1 and 2, 2019.

Award recipients were: Cameron Loewen (who is attending the University of Arizona), Kalila Phillips (currently at UHMC majoring in Biology), Victoria Teoh (attending University of Houston), and Brandon Wong (resides on Maui and currently in the workforce). The four students each received $2,000 to support their continued education and career pathways. Their teacher Trisha Roy, a STEMworks™ Advisor at H.P. Baldwin High School, also received $2,000 to support the Baldwin STEMworks’ lab.

According to Leslie Wilkins, MEDB President, “The Daniel K. Inouye Innovation Award is the highest student honor that MEDB bestows. Named in memory of the late Senator, who anchored this MEDB Ke Alahele event for many years and was our foundation for supporting STEM education, this annual award is presented to a Maui County student project team that demonstrates the most innovative use of STEM tools and capabilities to serve and improve our community.”

New to the event was the Price Is Right, STEM Edition led by game hosts Mackie Mac (of the Trance and Mackie show on Da Jam 98.3 FM) and Kilakila “Da Big Hawaiian” Kamau (of KPOA 93.5 FM). According to Wilkins, “This lively game provided an opportunity to share what it actually costs for various STEM programs, equipment and initiatives. It also provided a forum for Maui County’s STEM stars to share how the community’s generous support of STEM education is priceless.” 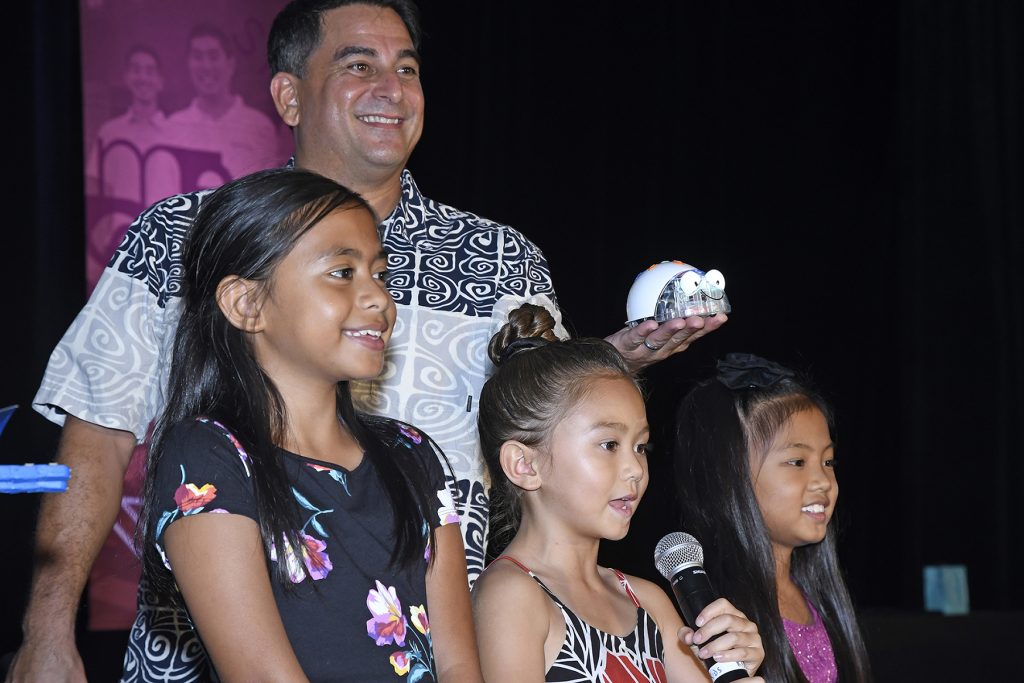 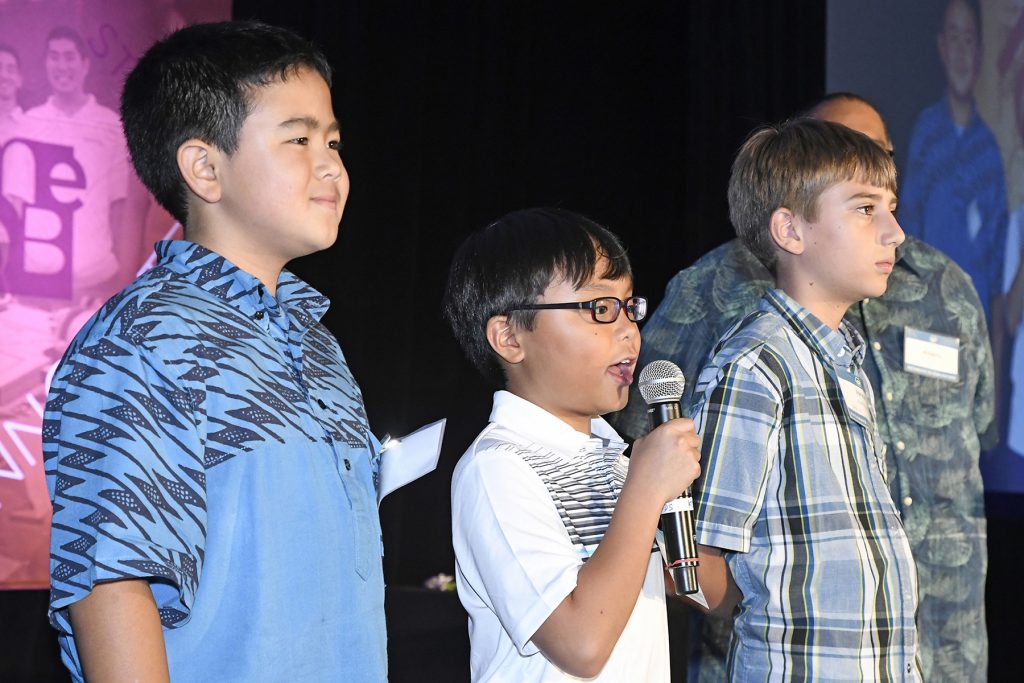 Students shared the power of robotics (pictured from left): Blake Yatsushiro, Brayden Kitagawa, and Izzy Enriquez. According to Branden, “Our robotics team did so well, that we got to fly to the mainland to compete in the National U.S. Create Robotics Competition in Council Bluffs, Iowa. It was a really long distance to fly, but it was worth it, because we placed in the top 14 in the nation!” Photo credit: Jose Morales 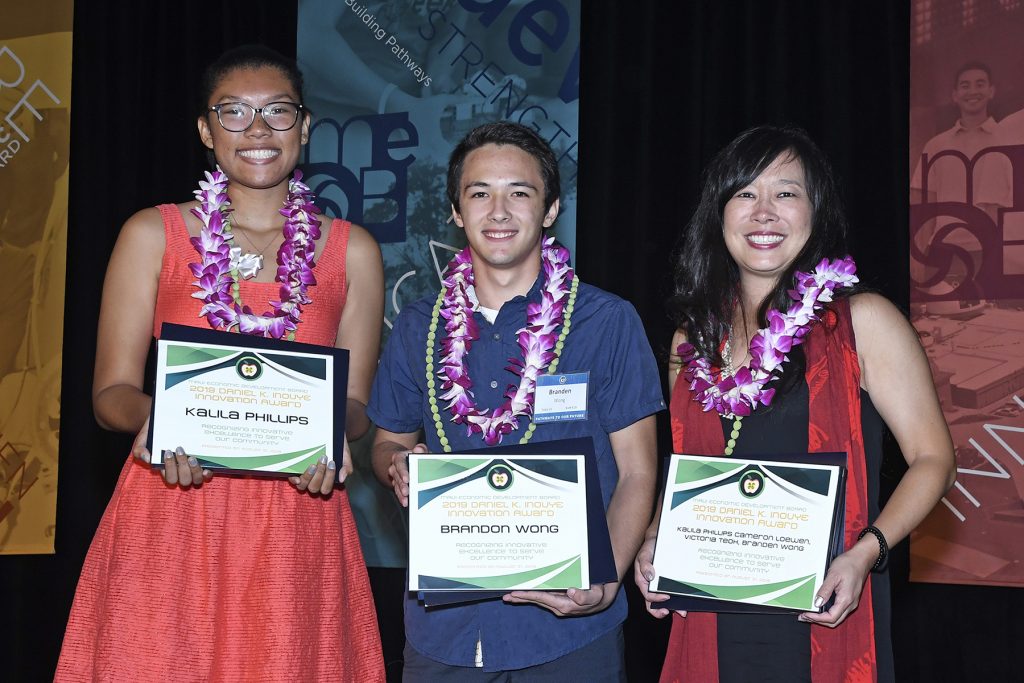 Daniel K. Inouye Innovation Awardees (pictured from left): Kalila Phillips, Brandon Wong, and Trisha Roy. Not pictured: Cameron Loewen and Victoria Teoh. According to Kalila, “We had such an amazing experience at this year’s Hawaii STEM Conference held at the Hawaii Convention Center. We had the opportunity to participate in the on-site Coral Hackathon which challenged teams to create a new coral model, design in CAD and then printed on a 3D printer. It was so inspiring to have access to training, exposure to cutting edge STEM tools, and networking with Industry professionals.” Photo credit: Jose Morales