Hawaiʻi convenience store, Minit Stop, today announced a decision to eliminate beef from its menu — instead replacing it entirely with “Impossible Burger.”

Company representatives say, “Minit Stop’s decision to remove all cow-based beef from its menu serves as a rallying cry for other restaurants to follow suit, highlighting the importance of making more sustainable decisions — without any compromise on taste.”

According to a company announcement, “Minit Stop specifically chose to work with Impossible Foods based on strong consumer demand and the brand’s track-record for creating delicious meat made from plants.”

“The flagship product from Impossible Foods requires vastly less land, water and energy than a conventional burger from cows. The award-winning burger rivals ground beef from cows for taste, nutrition and versatility — a perfect addition to the menus at Minit Stop, known for its high-quality, home-cooked cuisine,” according to the announcement.

“We’re seeing more and more residents and visitors opt for Impossible. Impossible’s plant-based burger acts, smells,and tastes like beef. So much so, that we can add our own local flavor profile to it. We included ingredients from some of Hawaiʻi’s favorite traditional recipes and created a winning combination unique to Minit Stop.” said Minit Stop Vice President, Jon Miyabuchi. “Our customers have been asking for the Impossible Burger by name almost since it debuted in 2016. We’re thrilled to give consumers exactly what they want, exactly what our planet needs, and with a local flavor profile twist.”

According to Minit Stop, Hawaiʻi restaurants are among the nation’s highest-volume outlets for Impossible Burger sales, with some restaurants selling more than 100 plant-based patties per day. Minit Stop anticipates “unprecedented sales volume” of the Impossible Burger, which just last month debuted on grocery store shelves.

Minit Stop has 18 stores throughout Hawaiʻi, including two locations that are fuel kiosks.

Minit Stop estimates that it will serve up to 6,875 pounds of Impossible meat per month, and up to 82,500 pounds for the first year. “That’s the equivalent to removing 200 cars from the road for a year, preserving a land area of more than 400 football fields large, and saving enough water to fill 55 million standard-size water bottles,” according to the company announcement.

Each of Minit Stop’s 16 store locations offers an island menu of “home-cooked” entrees and is most known for their Minit Stop Fried Chicken, along with a variety of salads and sandwiches daily.

The Impossible Burger is now America’s most popular late-night delivery snack, according to Grubhub’s “State of the Plate” report, with delivery sales surging 529% in the first half of 2019.

This summer, Impossible Foods announced a co-manufacturing collaboration with global food provider OSI Group, one of the largest food producers in the world.

Based in California’s Silicon Valley, Impossible Foods makes meat and dairy products from plants, saying it’s done “with a much smaller environmental footprint than meat from animals.” 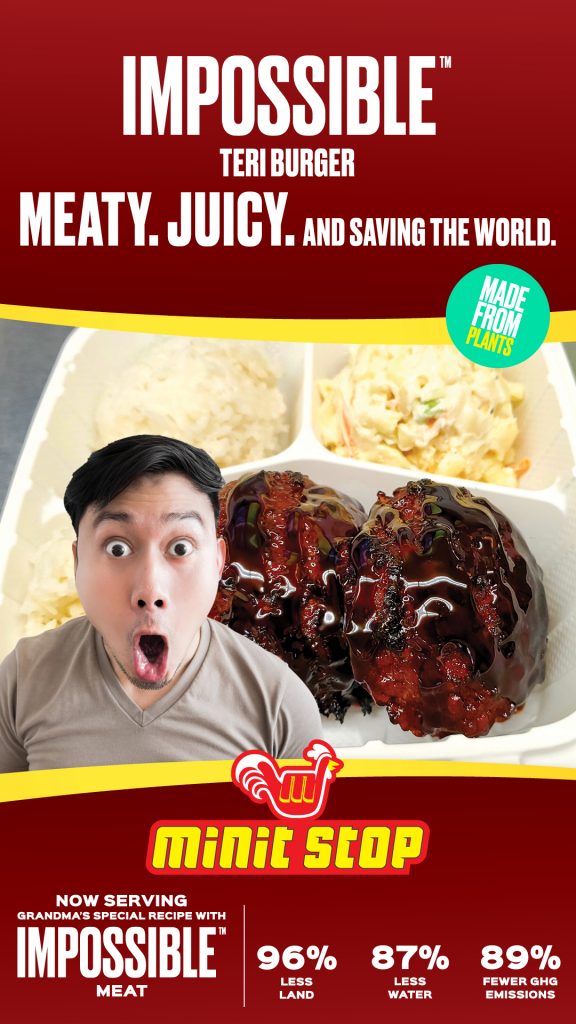