Eight months after a riot that caused an estimated $5.3 million in damage, overcrowding remains an issue at the Maui Community Correctional Center. Maui Now took a media tour of the facility on Tuesday, where dozens of emergency capital improvement projects are currently underway.

The Maui jail is currently at 40% overcapacity with 425 inmates being housed at the facility. That’s 124 more prisoners than the operational capacity and more than double the design capacity that was intended for the Maui jail.  It is however, a slight improvement from rates reported in May of 2018, when 469 inmates were being housed at MCCC and the jail was 56% over capacity. 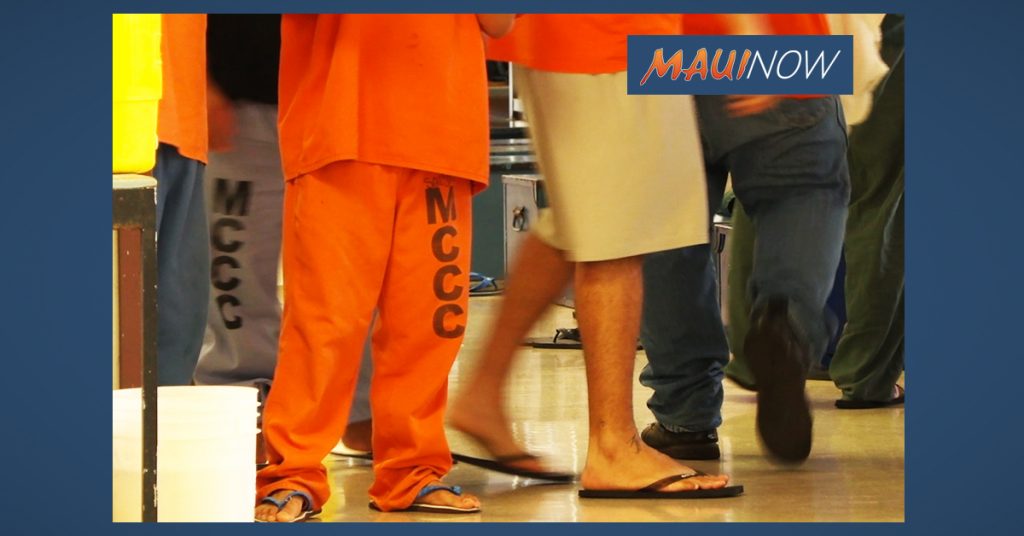 The tight quarters are evident facility wide. Warden Deborah Taylor said staff members are “doing the best they can to shuffle inmates” between areas based on their custody level and seriousness of their crimes.

A total of 91 inmates are currently housed in Module B, where the March 11,2019 riot began. Emotions of prisoners quickly ramped up in our presence, as inmates pounded against recently repaired cell doors.

The pile of trash from the common area has since been removed, phones are installed, tables have been replaced and paint has since dried, but capital improvement projects and security upgrades are ongoing.

In the nearby Module A, which also suffered damage from the riot earlier this year, an AC unit is working, but windows are still broken and have yet to be repaired. Around the facility, contract work is currently underway with projects under various stages of completion.

Public Safety officials called the process time consuming, but felt encouraged by the security camera upgrades which were already in progress when the riot occurred. There’s also plans for a new medium security facility at the south end of property which will initially house 32-36 beds.

This is less than the original projection of 80 beds. Department spokesperson Toni Schwartz said the current $7.5 million appropriation allows for 32 beds at this time. The project is slated to start construction in the middle part of 2020.

Emergency repairs following the jail riot were estimated to cost $5.3 million, and $5.1 million was secured through FY2019 appropriations. According to the Department of Public Safety, an additional $8 million in Capital Improvement Project funds was secured in the Fiscal Year 2020 Budget for long-term facility wide improvements, renovations, refurbishment and infrastructure work at MCCC.

Efforts were made over the years to help MCCC initiate CIP projects, and most were started in the years prior to the March riot. Those projects are either on-going or just completed.

A complete list of emergency funding appropriations and capital improvement projects for MCCC are listed below: