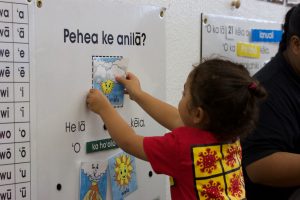 Rep. Tulsi Gabbard is calling on President Trump to quickly sign into law S.256, the Esther Martinez Native American Languages Programs Reauthorization Act, which was passed by the House yesterday and now awaits the President’s signature.

Rep. Gabbard is a cosponsor of the House’s version of the bill, H.R.912. The bill would reauthorize grants that preserve American Indian languages and expands them to cover smaller groups of learners.

These programs were named for Esther Martinez, also known as P’oe Tsawa or Blue Water, who helped conserve the native Tewa language spoken in New Mexico pueblos as a teacher and storyteller until her death in a 2006 auto accident.

“We must continue to support the revitalization and preservation of ‘Ōlelo Hawaiʻi and other Native American languages. It has been a long but important movement and this year Hawai‘i has received over $1 million in support for Native Hawaiian language immersion programs through grants that would be reauthorized by this bill,” Gabbard said in a press release.

“The President must quickly sign this bill into law. Preserving the Native Hawaiian language is vital to Hawai‘i’s culture and connects us to one another as well as our environment.”

According to the United Nations Educational, Scientific, and Cultural Organization (UNESCO), 74 native languages stand to disappear within the next decade.

Both the House and Senate versions of the Esther Martinez Native American Languages Programs Reauthorization Act enjoy bipartisan support. The House version of the bill has over 230 cosponsors.

The previous authorization expired in 2012; this bill would reauthorize the program for five years.

Biennial evaluations by the Department of Health and Human Services show the program increases fluency with 4,000 speakers and trains 170-280 Native language teachers each year.

The 2019 Pacific Region grantees include four institutions on O‘ahu: