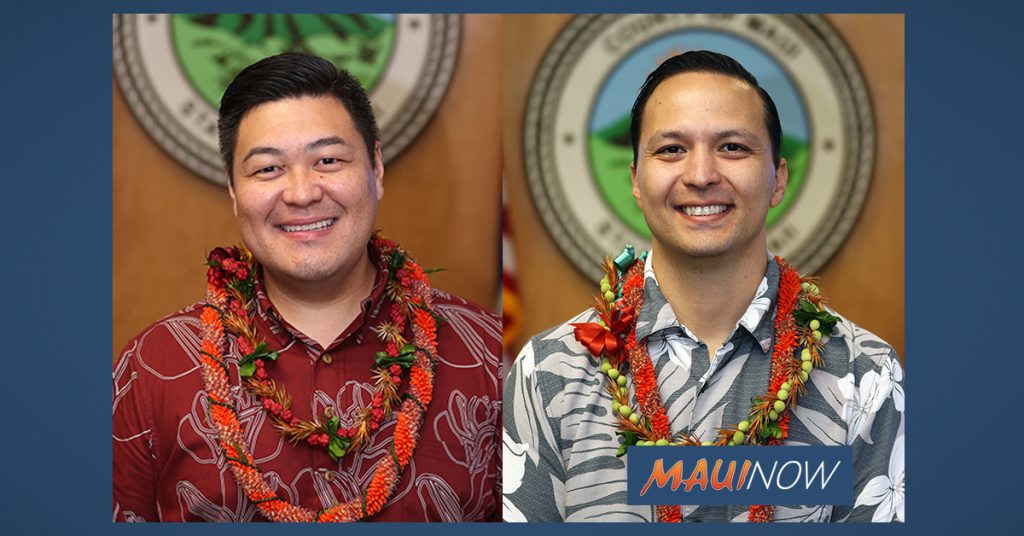 Maui Deputy Managing Director, Tyson Miyake, was named Chief of Staff today for Maui Mayor Michael Victorino’s administration. He fills the vacancy created by Deidre Tegarden, who resigned from the post effective Dec. 15, to return to her former position as Executive Director of the Nisei Veterans Memorial Center.

Mayor Victorino made the announcement during a press conference on Monday afternoon, saying Miyake has a bachelor of science degree in business administration and business law from the University of Nevada-Las Vegas. Miyake, a Kahului resident, is a 2000 graduate of Maui High School.

In accepting to the new role, Miyake said he is grateful for the year of mentorship she spent as deputy under Managing Director Sandy Baz.  He said that going forward, he plans to uphold the strategic goals of Mayor Victorino’s administration.

Filling the Deputy Managing Director vacancy created by Miyake’s new appointment, will be Josiah Nishita who has been serving Maui as County Clerk since January.  There was no announcement on who would fill Nishita’s vacancy in the Clerk’s office.

He served as deputy County Clerk from August 2013 to December 2018. Prior to that, he was a legislative analyst in the Office of Council Services.

“He has a vast amount of knowledge as far as not only with the County administration, but also the Clerk’s office,” said Mayor Victorino of Nishita, who holds a master’s degree in business administration from the University of Hawaiʻi at Mānoa.

Nishita born and raised on Maui and graduated from Baldwin High School in 2003 and earned a bachelor’s degree in sociology from George Fox University in Newberg, Oregon.