According to police, Lahaina Patrol officers were dispatched to the scene at around 10:12 a.m. on Wednesday, Dec. 18, for a report of a car being used to damage another vehicle.

Police say investigators found that the 51-year-old woman allegedly rammed her vehicle into another vehicle occupied by a 35-year-old male victim.

Police identified the woman as Michelle Howins and say she was arrested in connection with the incident, which investigators described as “intentional.”

According to police reports, the male victim stepped out of his vehicle after which Howins allegedly “attempted to run him over three different times.” Police say the male victim did not sustain any injuries.

Police say it was also reported that the suspect was allegedly “hitting passing vehicles and bicyclists with a metal pole” and that she was also “lying across the roadway blocking traffic.”

Howins is scheduled to make her initial appearance in Maui court this afternoon, where she faces counts that include disorderly conduct, resisting arrest and criminal property damage. 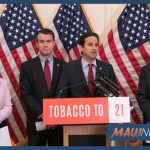 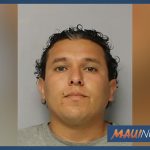