Much to the surprise of the owners at Kula Cottontail Farm, a baby alpaca was born on Friday, just in time for Christmas.

“I didn’t believe him,” said Christine Heidema when her husband claimed there was a brown baby alpaca on their farm on Friday.

Although the Heidemas’ knew the mother alpaca was pregnant, they believed their first attempt at breeding her did not take because initial tests came back negative.  So, they tried to breed the mother a second time; and with an 11-and-a-half-month gestation period, they believed the baby would arrive in April of 2020.

In honor of the holiday season, the baby was named Noel.  She is accompanied on the farm by her mother who also has a festive name, “Hope” and her aunty alpaca, named “Faith.”

In addition to the alpacas, the Heidema’s have 20 Angora rabbits and a flock of 10 seep on their farm.

Raising the animals are a hobby and Christine says she collects wool from them to spin into yarn and knit.  She then sells her products at the local farmers market near the Kula 200 subdivision each year during the holidays.

“It takes a full year to get enough inventory,” said Heidema.  While their farm is not commercial and does not do tours, on occasion, individuals will contact the Heidema’s to purchase yarn, and they in turn will show their visitors where the yarn came from.

Christine described the alpacas as “very peaceful creatures, very quiet,” and “graceful to watch,” but says don’t like being touched or cuddled.  “They walk around munching all day, laying out on the grass.  They’re curious too and absolutely love to play in the hose.”

The Heidema’s alpacas are from the Big Island of Hawaiʻi.  Besides the ones on Kula Cottontail Farm, Christine says another resident owns some in Kula and there’s a couple more on a property in Haʻikū.

Video of the new baby Noel shows her with a sleepy head rolling from side to side, trying to stay awake. On her first day, she also attempted to take a dust bath, which alpacas love according to Heidema. 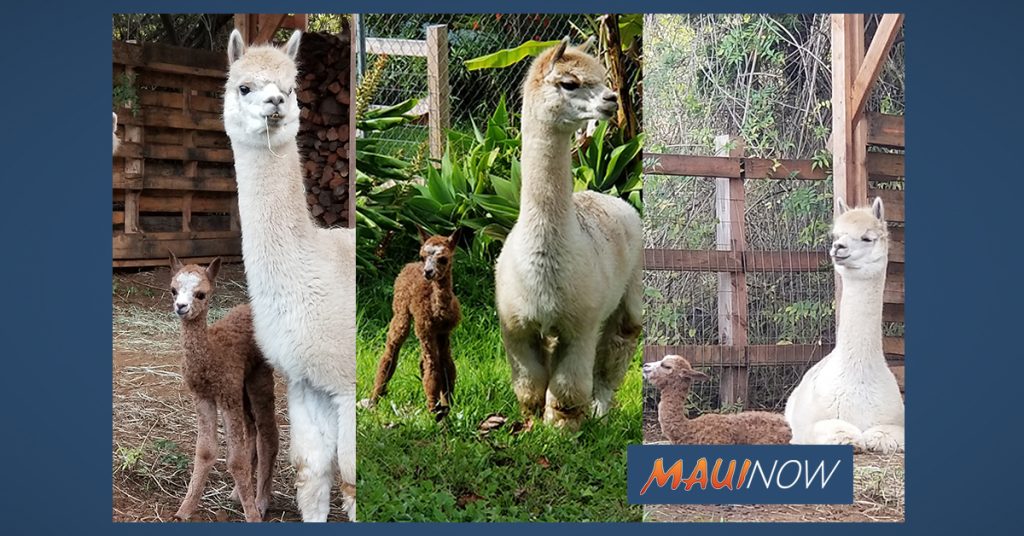