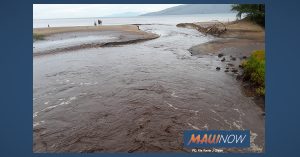 The National Weather Service has extended a special weather statement for coastal flooding and high winds that are expected for Maui County through this weekend.

According to the agency, coastal flooding is possible over the next few days along all shores of Maui due to unusually high water levels.

The greatest potential for coastal flooding impacts will be around the peak high tides, which will occur between midnight and daybreak each day.

These water levels combined with the potential for heavy rainfall and strong southerly winds Tuesday through Wednesday could exacerbate flooding in these low-lying coastal areas due to poor drainage.

“Impacts of the higher than normal water levels may include flooding of beaches that normally remain dry, salt water inundation of typically vulnerable low-lying roads, docks, boat ramps, and other coastal infrastructure,” an announcement from the agency read.

Officials say the potential for coastal flooding could diminish by the end of the upcoming weekend as the peak daily tides lower.

In the meantime, the public is being urged to avoid crossing fast flowing or rising water in a vehicle or on foot.

The County of Maui is asking the public to provide feedback on the impacts of coastal high water events. Photos can be uploaded here. 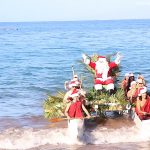 Santa Surfs into the Grand Wailea in a Hawaiian Outrigger Canoe 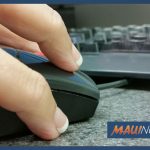