First Day Hikes, in all 50 states started nine years ago as one way to encourage people to get out into nature by enjoying the enormous variety of state parks.

Hawai‘i’s version of the First Day Hike, held on New Year’s Day, is unique for a number of reasons. It’s among the best attended, with as many as 700 people making the one-mile hike to the Makapu‘u overlook at the Kaiwi State Scenic Shoreline on O‘ahu’s east side.

“This is likely the only hike in a state park that includes performances recognizing three different cultures,” explained DLNR Division of State Parks Administrator Curt Cottrell. Hawaiian culture is marked right at sunrise with the blowing of a pu (conch shell), this year, by Lahela Hekekia. Then Hālau Mele, led by Kumu Sam Gon greeted the crowd with an oli.

As in the past, the Asian culture, was represented by the young drummers of the Taiko Center of the Pacific. And finally, the European culture was represented by four bagpipers. All three performances were warmly received by the hikers, some who make the trek an annual affair and many others who made the hike for the first time.

While the hike to the overview is short, paved, and relatively easy, the First Day Hike does expose people to the beauty of Hawai‘i, the benefits of an active lifestyle, and the preciousness of our state’s natural and cultural resources.

Cottrell feels it’s become so popular not only for the spectacular views and heart-stopping performances, but also because while much of the rest of the country is in “shiver-mode,” at sunrise today the temperature was a balmy 72 degrees. He’s already thinking about 2021, the 10th anniversary of the First Day Hike program. In addition to the multi-cultural flavor of the hike, he’d like to do something special and even more unusual next New Year’s Day. 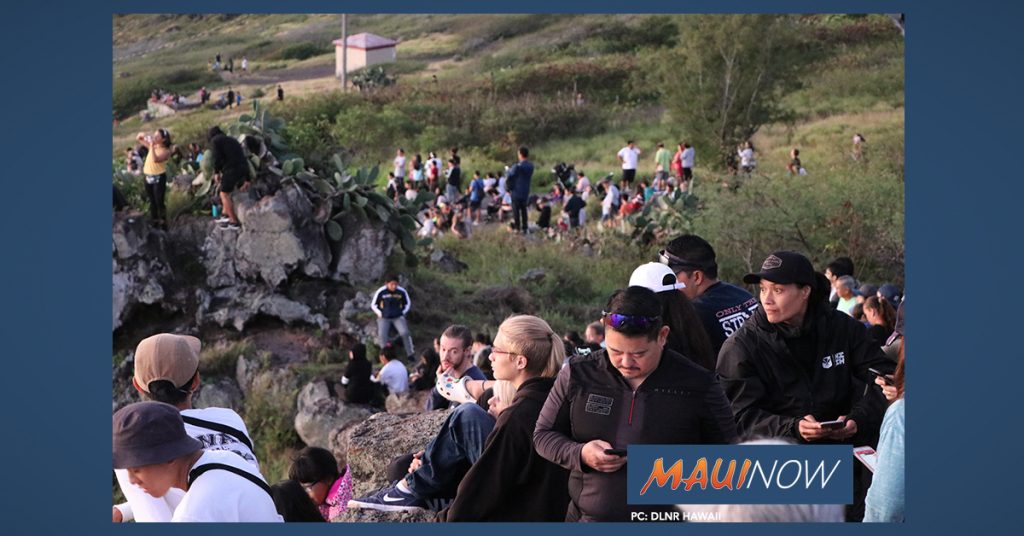 This comments section is a public community forum for the purpose of free expression. Although Maui Now encourages respectful communication only, some content may be considered offensive. Please view at your own discretion. View Comments
Trending Now
1Maui Council State Set Aside Money To Buy 257 Acres In Maʻalaea But Developer Beats Them To It 24 7 Earthquake Beneath Hualalai Volcano On Hawaiʻi Island Caused By Slip Along Fault No Tsunami Generated 3Maui Hospital Updates Visitor Policy Due To Rising Covid 19 Positivity Rates 412th Annual Food Wine Festival Starts On Maui Then Moves To Big Island And Oʻahu 5Red Placard Issued To Restaurant In Lahaina Maui 6Maui Obituaries Week Ending May 22 2022
Back to Top