Murakami, Kurokawa and Tanaka Honored as Nihon Bunka Awardees for 2020 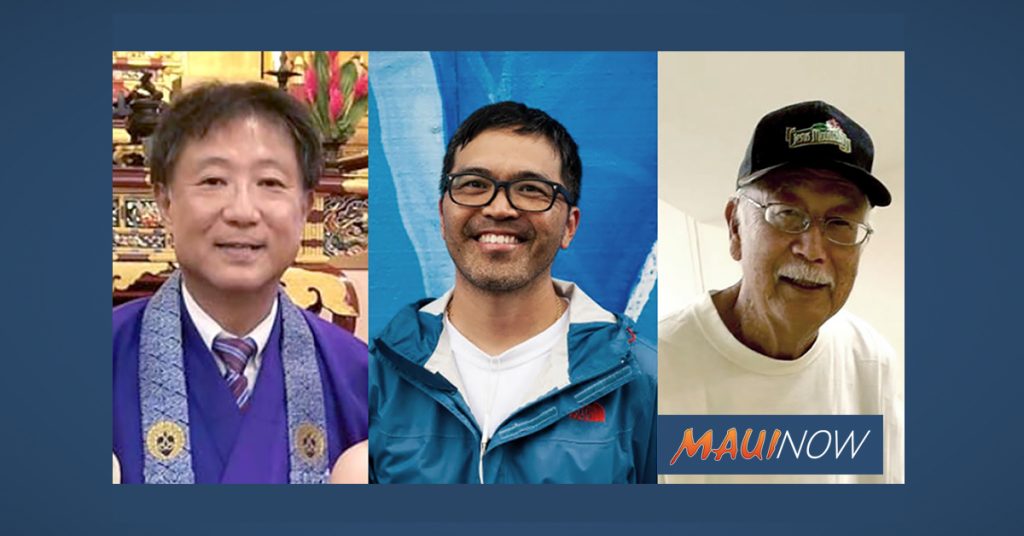 Murakami, Kurokawa and Tanaka honored as Nihon Bunka awardees for 2020.

The Japanese Cultural Society of Maui will welcome the Year of the Rat at its annual Shinnen Enkai (new year) dinner on Saturday, Jan. 25, at 5:30 p.m. at the Maui Beach Hotel.

Three Nihon Bunka recipients–Reverend Shinkai Murakami, Kirk Kurokawa and Senator Joe Tanaka–will be honored for their excellence and dedication in the perpetuation of the Japanese culture.

Reverend Shinkai Murakami was born in Fukuoka, Japan and is the current residing minister for the Wailuku Hongwanji Mission since 2004.

As the principal of the Japanese Language School for the Wailuku Hongwanji, he has implemented new programs that have significantly increased student enrollment over the years. New programs include culture days that teaches origami, sushi and musubi making, okonomiyaki and mochi making, and educational trips to Japan, In 2012, the Honolulu Japanese Chamber of Commerce presented him with an award to recognize his efforts with the Japanese language schools throughout the State.

He was a former president of the Japanese Cultural Society of Maui and assists many community programs and organizations, volunteering to teach calligraphy, Japanese cooking and many others.

As a minister, he has been involved with planning and implementing many temple improvement projects, including increase in membership. During hurricane Iniki on Kauaʻi, he was instrumental in rebuilding the Kapaʻa temple and unifying the community. As a mentor, he has also advised Eagle Scout candidates to take on temple improvements projects. In 2011, he organized a committee and launched a successful cookbook, A Taste of Dharma, to raise funds for the temple’s Vision 2030 program. He also leads the church’s annual mochi making tradition for the new year.

Sensei Murakami’s contributions to the community doesn’t go unnoticed and we thank him for his years of service.

Kirk Kurokawa, a local boy of Hawaiian, Japanese and Chinese descent, was born and raised on Maui. He received a BFA with distinction in Illustration from the California College of Arts and Crafts. In 2001, he returned home to Maui, became a self-taught oil painter and pursued his dream of becoming a fine artist.

Kurokawa’s paintings focus predominantly on the “simple, everyday life moments” and have been showcased in various exhibitions throughout the state. Most recently, his installment at the Nisei Veterans Memorial Center’s mural has brought the 442nd Regiment Combat Team and 100th Infantry Batallion’s history to life.

Many of his paintings feature aspects of the Japanese culture such as scenes from bon dance, Maui Matsuri, Tokyo life, Japanese wood carver, among others.

He is best known for his portraiture and has been in every installment of the Schaefer Portrait Challenge, and was awarded the Juror’s Choice Award in 2006, and the People’s Choice Award in 2015. He is also the first and only native Hawaiian to paint the official Portrait of the Governor of the State of Hawaiʻi.

Time seems to stop – which it does when one is faced with the art and artistry of Kirk Kurokawa’s extraordinary paintings. It’s a contemporary approach and a willingness by the artist to be, “of his time”, and considering his place in the art world, rendering a new classic.

With his desire to achieve goodness and truth through his art, he hopes to make a difference in the community. Most importantly, he would like to pass on the knowledge of art to the future artists of Hawaiʻi in the hopes of creating a much more diverse art community that is truly creative.

Former State Senator and Maui County Councilmember Joe Tanaka has served the Maui County community for decades with an emphasis on economic and cultural development. He began his life of public service on the Maui County Council from 1987-1992 and in the Hawaiʻi State Senate from 1992-2000. During this time, he understood the importance of the connections between Hawaiʻi and Japan, not only because of history, but also because of the economic benefit, especially because of the huge local investment from the Japanese economic boom of the 80’s and 90’s.

This, along with wanting an outlet to bring together like minded individuals, lead him to found the Maui Japanese Chamber of Commerce, which helped to bring those with common values and goals together to further business right here on Maui. The Chamber members led the effort to create partnerships with Japan and led to the creation of a sister-chamber relationship with Fukuyama City, Hiroshima, Japan in 1997. This relationship then led to the creation of the Fukuyama City – Maui County sister city relationship in 2008. This relationship has turned into Maui County’s strongest sister-city relationship. On numerous occasions Fukuyama’s Mayor has visited Maui, and Maui Mayors Charmaine Tavares, Alan Arakawa, and Michael Victorino have all visited Fukuyama City.

In recent times, Senator Tanaka has also spearheaded the effort to build the Rose Garden fronting the County building to showcase our friendship with Fukuyama and other sister cities. He continues to be involved in international relations, especially with Sister Cities with Japan.

Joe Tanaka had a vision for Maui to have international relationships because he realized that it would help our local residents to not only appreciate our own culture and traditions, but also learn from others across the world, especially Japan. It is because of his spirit of caring for the community and a lifetime of service that Senator Joe Tanaka is receiving the Nihon Bunka Award.

Tickets are $55 and can be purchased online at jcsmaui.org.

Guests will be welcomed by traditional otoso (sake welcome). The event will also feature a silent auction with proceeds to go toward the club’s various projects.

JCS Maui will also arrange to dress attendees who wish to wear kimono. To schedule kimono dressing, or for other information about the dinner, call 298-3352.