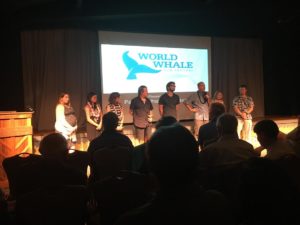 The Pacific Whale Foundation will present a biopic of founder Greg Kaufman, “A Voice for Whales” during its 40th Anniversary World Whale Film Festival on Friday, Feb.14 at the Historic ʻĪao Theater in Wailuku.

A film created over the course of two years by PWF staffer and acclaimed photojournalist Selket Kaufman, the 20-minute piece tells a story of hope and of “standing up for what you believe in, no matter the odds,” according to the filmmaker, who traveled to Tonga, Slovenia, Australia and the continental US to interview, friends, colleagues and people who knew him best to help tell his story.

As Kaufman’s wife and travel companion during the final years of his life, Selket worked with the Foundation’s Executive Director, Kristie Wrigglesworth, to help preserve Greg’s legacy through a glimpse of those that knew him best.

Maui-based projects also include volunteer-based projects to preserve Maui’s ecosystems, marine education programs for children, advocacy campaigns for cleaner oceans and coastal marine debris monitoring and removal efforts. He was involved with the International Whaling Commission and its subcommittees, was a contributing member to the Southern Oceans Research Partnership and co-led the United Nations Environmental Program’s Regional Workshop on Marine Mammal Watch in the Wider Caribbean Region.

Additionally, Kaufman was one of the original members of the Hawaiian Islands Humpback Whale National Marine Sanctuary’s Advisory Council in 1996, said Allen Tom, Pacific Islands regional director for the National Oceanic and Atmospheric Administration’s Office of National Marine Sanctuaries, which was actually called the pre-advisory council before the sanctuary was finalized in 1997.

“Fortunately, my time with Greg was not only a gift but also an inspiration to relay his passion and vision towards something greater than ourselves,” shares Selket.

“I am honored to emcee the Pacific Whale Foundation’s 40th anniversary World Whale Film Festival,” shares Kaimana, “Growing up on Maui, I have always been connected to the ocean and the life within it. My first name means “the spirit of the ocean is calm” and like many of PWF’s supporters and staff, the ocean is where I feel most at home. Of course, we want to protect the things we love and that is why I have been involved with PWF since interning with the organization when I was in middle school. As a native Hawaiian my reverence for koholā is in my DNA and I believe we have a kuleana to protect and mālama the koholā as they are the kinolau (physical form) of Kanaloa, god of the ocean.”

There will also be a pre-event at Kīpuka Square from 5 p.m. to 7 p.m. featuring a “talk story” session with the filmmakers, who include Maui Huliau Foundation, Andrew Raak, Rémi Cans (France), and Project Reef Life New Zealand.

Cheeseburger in Paradise and Waikiki Brewing Company
All FOTH and BOTH Positions!
West Maui · 5 days ago
Looking for locally based talent?Post a Job Listing