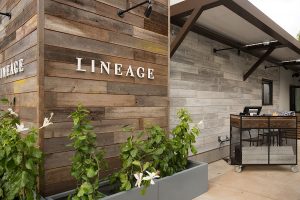 Lineage, located at the north side of The Shops at Wailea. Courtesy photo.

Award-winning Chef Sheldon Simeon is passing the reins to his chef de cuisine, MiJin Kang Toride, at Lineage Restaurant.
Having built the foundation of Lineage on family and family values, Simeon says he felt he had to be true to himself and is stepping away to spend more time with his wife and four children.
Simeon also noted that he is “very proud of what he and his team have accomplished since opening their doors, and is excited to see how the team will take what he’s built even further.”
Chef MiJin Kang Toride has been part of the team at Lineage since August.
Toride is “equally devoted to celebrating the melting pot of cuisines that comprise Hawaii, as well as sharing inspiration from her own lineage,” a press release from the restaurant read.
Growing up around her grandmother’s constant cooking, as well as the hodgepodge of cuisines that made up her native Guam, meshing flavors became a passion of Toride’s from an early age.
Over the years her career took her to Terra in St. Helena, Morimoto in Napa, Ame at the San Francisco St. Regis, and Ka’ana Kitchen on Maui, where she was Chef de Cuisine.
MiJin also took a leap of faith to open her own spot, Mendo, before joining the team at Lineage.
“The energy in the kitchen at Lineage is intoxicating and I could not be more excited to lead this team in taking the restaurant to the next level,” Toride said.
Joining Toride to round out the team is Bar Manager, April Talia Leslie. Born on the island of Kaua’i, Leslie was raised in a household with a focus on natural and Chinese medicine, with a medicine cabinet stocked with herbs and tinctures.
Being raised in the rural areas of Hawai’i has only further inspired Leslie’s appreciation for and connection to the land. Leslie is an avid forager of local ingredients, and strives to find new ways of integrating plants with medicinal properties into cocktails.
“While this departure is bittersweet, I am confident the team will continue to impress, and will thrive under the direction of Chef MiJin,” Simeon said.
“She has been able to come in and make the transition seamless, and has a real knack for uniting the team. I know that diners will be impressed by what she and the team have cooking.”
Simeon’s fans can also keep their eyes out for his new cookbook, “Cook Real Hawai’i: Local-Style Recipes from the Islands of Aloha,” which is set to be out later this year.