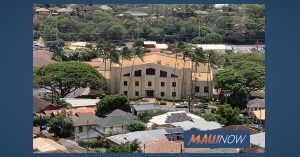 Maui police have identified two juvenile female suspects in a terroristic threatening that prompted a “shelter in place” at ʻĪao Intermediate School on Thursday.

ʻĪao Intermediate School principal M. Dillion reported to Maui police at about 12 p.m. that a student found a written threat in a bathroom stall that read “I’m so tired of this school Today at 8th gr lunch end of 7th grade lunch I’m shooting this school down to da ground.”

As a precaution, principal Dillion ordered a “shelter in place mode” for the school.

After inspecting the campus, police officers determined that “nothing appeared to be out of the ordinary.”

Officers remained on campus until students were released.

According to MPD, officers were told that the threat intended to force the school on lockdown in order to avoid going to the last class of the day.

The juvenile suspects have since been released to their guardians.