Trump: “We Cannot Let The Cure Be Worse Than the Problem Itself”

In an afternoon media briefing, President Donald Trump reviewed a list of critical supplies currently being distributed by the Federal Emergency Management Agency as the nation responds to the COVID-19 pandemic.

Focusing on the areas with the greatest need, FEMA has shipped 73 pallets of Personal Protective Equipment to New York City and 36 pallets to the state of Washington.

In the past 96 hours, FEMA has also received donations of approximately 6.5 million masks with millions of additional masks being made and additional PPEs that will be distributed to medical hot spots.

“We cannot let the cure be worse than the problem itself,” said President Trump.  “At the end of the 15-day period, we will make a decision as to which way we want to go, where we want to go, timing–and essentially we’re referring to the timing of the opening… essentially the opening of our country–because we have it pretty well shut down in order to get rid of this invisible enemy,” he said.

“Two weeks ago we moved at record speed to pass paid sick leave and paid family medical leave, and approve $8 billion including money for the development of treatments and vaccines,” said President Trump.

“Now congress must demonstrate the same bipartisanship and join together again to pass the Senate bill as written,” said President Trump.

Scroll Down to Read 58 Comments 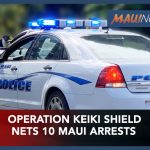 ARTICLE COMMENTS ( 58 )
This comments section is a public community forum for the purpose of free expression. Although Maui Now encourages respectful communication only, some content may be considered offensive. Please view at your own discretion.
I Understand, Show Comments