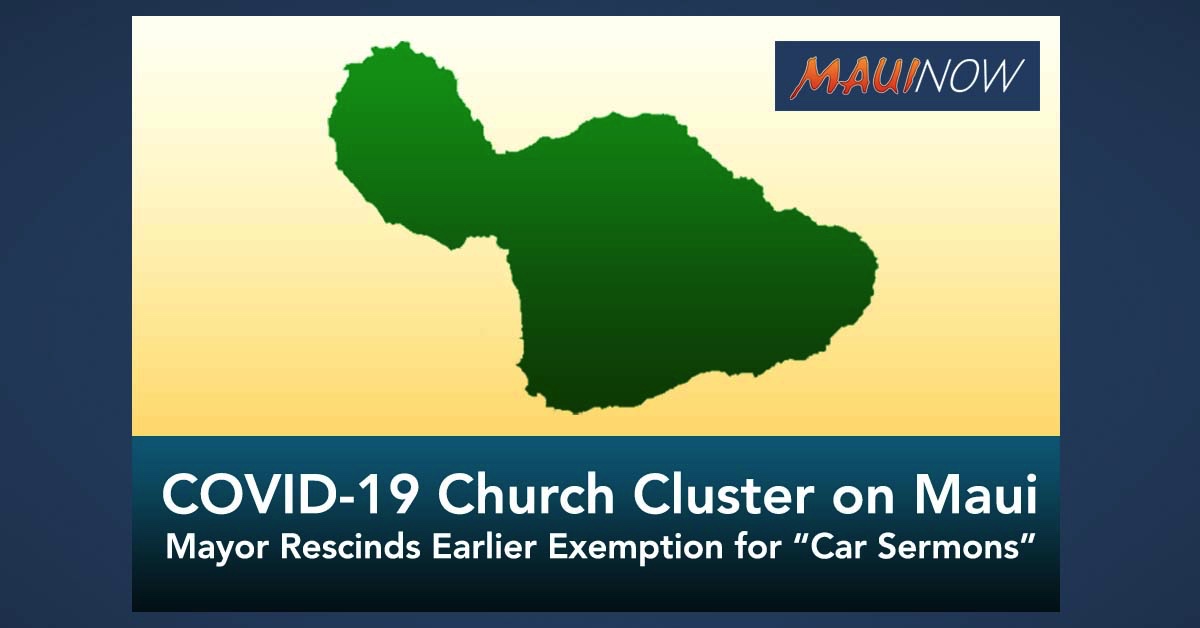 A new letter from Maui Mayor Michael Victorino has surfaced in regards to Easter activities at King’s Cathedral in Kahului.

After rescinding an earlier exemption on “car sermons” Mayor Victorino issued a follow-up letter to Dr. James Marocco saying the distribution of food to families in need is considered a “permitted essential business/activity under rule I.B.4.”

The Mayor’s latest letter, which was posted this evening by the Maui Police Department via their Facebook page states, “It is my understanding that on Easter Sunday, King’s Cathedral will pass out food members of the congregation. This will be conducted as a drive through pick up, with no one leaving their cars.  Those distributing food will be properly attired in masks and gloves while practicing social distancing.”

An earlier letter urged the church to cancel its Drive-in Easter service for Sunday or conduct it via social media.

Again, state and county officials have not said what church has the cluster, but the Mayor raised the issue in the earlier letter, expressing his concern over public gatherings.

Maui has a new cluster of COVID-19 positive cases linked to a church on Maui.

Initial news of the cluster surfaced at Friday’s state press conference in which state Health Director Dr. Bruce Anderson said the cluster existed, but could not identify which island it was associated with or what church group was affected.

Today, confirmation of the link to Maui was obtained in a letter from Maui Mayor Michael Victorino to the leader of an island congregation, discouraging gatherings and rescinding an earlier exemption issued two days prior that had allowed “car sermons.”

In his letter, Mayor Victorino did not say what church had the cluster, but said the purpose of his directive that went into effect on Friday was “in response to the current health crisis,” and “was to protect the public from COVID-19 by continuing to prohibit social gatherings.”

“These directives apply to all gatherings, including secular and non-secular, unless an exception exists under the rules. Please consider this letter as revocation, and suspension, of the letter issued previously,” the Mayor wrote, “that permitted car sermons at your church.”

The mayor’s letter, dated April 11, 2020, was addressed to Dr. James Marocco of King’s Cathedral Maui and was posted to the Maui Police Department’s Facebook page. In the letter, the Mayor said:

“Since my last conversation with you, we have had 21 additional positive COVID-19 results. Some of those positive COVID-19 results were a cluster from a church on Maui. To avoid any additional spread of COVID-19, it is my sincere hope that you assist in protecting your congregation, and our police officers, by complying with my directive prohibiting gatherings. This would include canceling your Easter service scheduled for tomorrow or having it via social media.”

Maui Now called King’s Cathedral on Saturday evening at 6:20 p.m. and was told that “drive through” services were still planned for Easter, which include the distribution of groceries and Easter baskets.

A King’s Cathedral Facebook post says that during a similar service offered on Good Friday, the church team was “wearing gloves and masks” and “took extensive protective measures to ensure that everyone who attended was safe.” The post also states that, “everyone stayed in their own quarantined vehicles” as they practiced social distancing.

The church is not the only one on island that has been conducting drive-in services. The Grace Church Maui in Pukalani had also organized a drive-in; however its website noted that “due to COVID19,” the Upcountry congregation “will be meeting via Social Media” with online Sunday Service planned via its Facebook page.

Many island congregations of various denominations have been finding alternative ways to hold services and meet with members, with many turning to online streaming to deliver messages.

It is still unclear what church is affected by this newly reported cluster or how many individuals it includes.

As of noon today, Maui has a total of 80 COVID-19 positive cases. Half (40) have been released from isolation; seven have required hospitalization, and there have been three COVID-19 related deaths in Maui County.