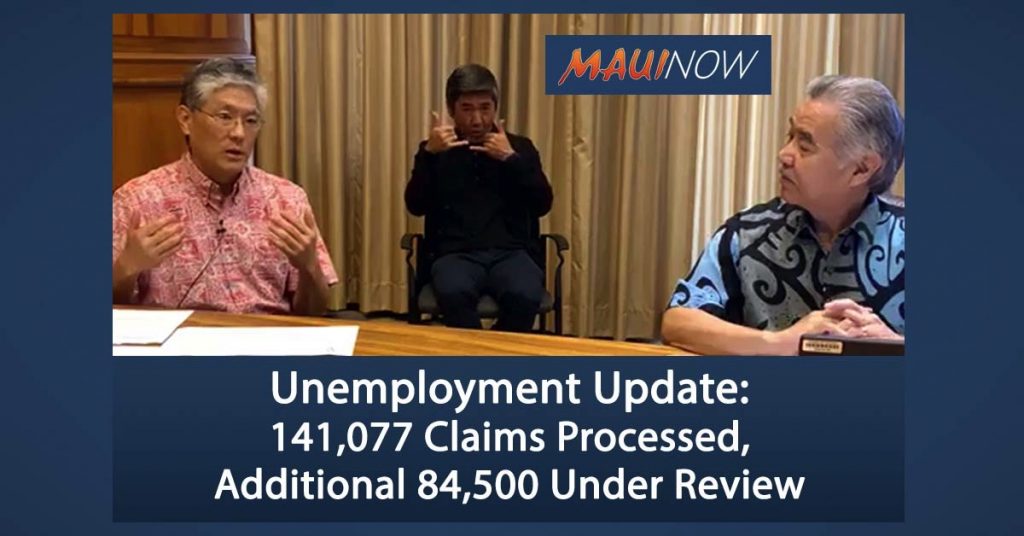 Governor David Y. Ige held a live Facebook Community Connection event this morning with guest Scott Murakami, Director of the Department of Labor and Industrial Relations. (The complete stream is posted below for viewing in its entirety).

“We continue to see results of all of your efforts to embrace social distancing and to implement all of the mandates that the mayors and I have put in place,” said Gov. Ige.  “We’ve had more than two weeks of six or fewer cases which I think is one of the foundational conditions we needed to see in order to reopen our economy.”

State officials had indicated that they would have to meet three conditions met before moving forward with reopening the economy: (1) a downward trend in the number of new cases; (2) capacity of the health care system and access to ventilators; and (3) a dynamic testing system.

The governor today noted that hospital beds are at about 50% occupancy, ICU bed occupancy is less than 50% and utilization of ventilators is at less than 20%.  He also noted that with the help of private labs and the state’s public health laboratory, Hawaiʻi has the capacity to test 3,000 or more cases per day.

In total, the state has processed 141,077 claims as of yesterday (May 6, 2020)–that is just shy of 63% of the total number of claims received. Of the claims that have been processed to date, 100,602 claims were paid out–that represents just under 72%.  The residual amount of 40,000 are claims that were denied. The state currently has in process 84,510 claims, which is the priority at this time.

That pushes the total number of claims filed to date to more than 225,500.

Since the start of COVID-19 response in Hawaiʻi, the state has paid out over $320 million in benefits.

According to Scott Murakami, Director of the Department of Labor and Industrial Relations, $19 million in benefits were paid out yesterday, including $11 million that went through the $600 plus up federal program, and $8.7 million of that was out of the trust fund.

Murakami notes that the largest weekly payout allowed in the state is $648.

“Starting around the 18th of March when we saw our antiquated mainframe system as well as the portal that receives online filing start to degrade,” said Murkamai, “demonstrates a few things.”

Solutions that were implemented include: redistribution of personnel and technology upgrades.

The department now has more than 600 volunteers working at both the convention center and state library system to make corrections to the more than 84,500 claims under process.

Weekly certifications are required for those that are approved to ensure that the claimant reports that they are still unemployed and still entitled to benefits.  Murakami said that the department can not rely solely on the employer’s report.