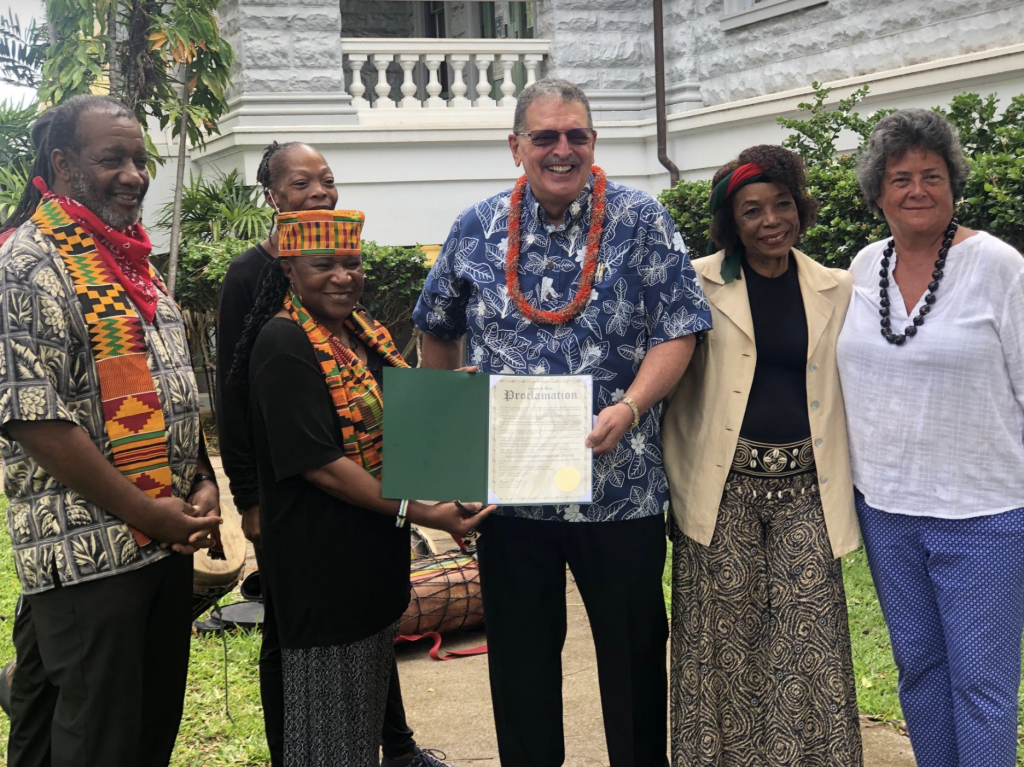 “Aloha is not just a word. It’s a way of life,” Victorino told those gathered in front of the Maui County building.

Juneteenth, a combination of the words “June Nineteenth,” is the freedom day designated by many African Americans  and the longest running African American holiday in the United States. The annual holiday is observed in 47 states, but not in three states, including North Dakota, South Dakota and Hawaiʻi.

A coalition of groups participated in the gathering, including leaders of the annual statewide Dr. Martin Luther King Jr. Peace Poetry Awards.

Sandra Shawhan, vice president of the African Americans on Maui Association, the organizer of the gathering, said Juneteenth represents an important turning point for the United States and for human rights.

“Juneteenth deserves, now more than ever, to have its own day in the spotlight,” said Shawhan, a retired principal of South Maui’s Kamalii Elementary School.

Association executive director Ayin Adams said being a part of this movement means working through negative feelings to understand that each one of the people in attendance counted.

Juneteenth, was celebrated first in 1865 in Texas to observe the day federal troops arrived to take control of the Lone Star State and enforce the freeing of enslaved people.

The action in Texas, which freed 250,000 slaves, was two years after the President Abraham Lincoln issued the Emancipation Proclamation, declaring freedom for all enslaved people in Confederate States in rebellion against the nation.

The federal enforcement in Texas was two days after Confederate General Robert E. Lee surrendered at Appomatax Court House in Virginia, marking the end of the rebellion and civil war.

African Americans and their supporters celebrated a jubilee the following year and its observance has  spread to virtually all states.

In 1979, Texas became the first state to make Juneteenth an official holiday.

The Asian American coalition had members of more than 25  groups nationwide endorsing Black Lives Matter events when it had a video conference call Tuesday, including the Japanese American Citizens League, Filipino Advocates for Justice, and Asian Pacific American Labor Alliance.